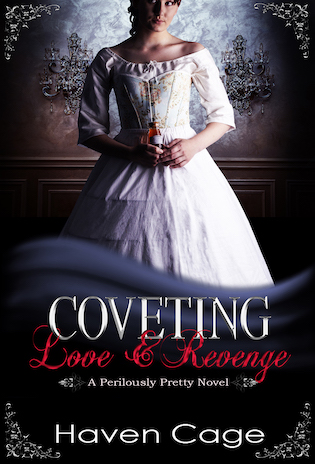 Synthia will do anything for her daughter – even murder.

Penniless and jaded governess, Synthia James, is trapped with her employer, a man she once loved but now despises. His obsession with money and stature has corrupted them both. When he bids their young housemaid to kill a man who threatens his business, Synthia’s maternal instincts take over, and she commits the heinous deed herself.

Now there’s another business enemy… and her former beau wants him dead. But the new cotton farmer has revived Synthia’s long-forgotten passions.

With blood on her hands already, Synthia is prepared to kill again. But who? The new business partner for her daughter’s sake, or her greedy lover for morality and freedom?

Look for my review of this book coming soon!

The iron’s edge sunk into his head like an ax striking a ripe cantaloupe on a warm summer afternoon.

I gripped the icy metallic handle tighter, preparing to deliver another blow. Frozen in place, I watched anxiously for the man to accept what I did and keel over.

He spun on his heels drunkenly. The poor man’s mouth dropped open, his brows angling up in stark confusion. His left pupil ballooned to the size of a nickel, black engulfing the toffee brown of his iris.

I covered my mouth with a shaky hand.

Mr. Kingly staggered backward. His eyes rolled to the back of his head, and he collapsed to the floor like a sack of grain.

Oh my God. What have I done?

He didn’t warn me. Edison didn’t tell me it would be so…messy. So…bloody.

Why did I do this?

Something warm and goopy trickled down my left index finger.

I wiped my hand on my skirt.

Instantly realizing my carelessness, I gaped down at the layers of silk covering my thigh. Fine cerulean threads absorbed the red handprint I smeared along the folds of fabric.

There it was, a single blemish of indisputable evidence forever marking my clothes. A scarlet testament to my wrongdoings.

The room set into a dizzying spin around me. I threw my hand against the wall, steadying myself. My breath quickened. The bones of my corset dug into my ribs.

I can’t breathe. I’m going to faint right here…next to Mr. Kingly. They’ll find me beside his dead body and know, without a doubt, it was me.

Slumping over, I tugged at the edge of my bodice, struggling to gulp down air.

Why didn’t I just tell him no?

“You know why, Syn,” I whispered between jagged breaths.

A soft gasp behind me broke the chaos of my shamed thoughts.

I twirled around, the hem of my bell-shaped dress dragging in the pool of blood collecting around my feet. The added weight of Mr. Kingly’s life-force soaking into the lofty fabric weighted me down like fifty-pound shackles fastened to my ankles.

Tula stood at the foot of the cellar stairs quiet as a mouse, her glossy eyes fixed on me and her lips pressed into a thin line. She, somehow, sneaked up behind me.

A rock settled in my stomach. Had she seen me?

I wound my shoulder in a small circle, the clothing iron heavy in my right hand. Chilling and cumbersome like Mr. Kingly’s blood, it taunted me with the crime I committed minutes before and pulled at my strained joint.

“I thought I told you to remain on the first floor during the party.” I glanced down at her feet, and her bare toes curled sheepishly.

The clever girl removed her shoes so I wouldn’t hear her coming.

She was always looking out for me, worrying Edison’s demands would break me one day. I should have known she wouldn’t keep her distance from me tonight. Tula was never far from me, ready to pick me up and give me strength whenever she suspected I was falling too deep into despair.

She picked at an ivory button on her sleeve, her emerald eyes glossy. She was particularly concerned about how I’d handle tonight.

The fifteen-year-old girl with mellow beige skin and a spray of dark-brown freckles bridging her cheeks and nose stared at me. Ignoring my remark about her tending to the gathering, she remained quiet and clung to her own inner strength. Most people would shriek and run if they walked in on a tableau such as this. Aside from a slight tremble in her shoulder, Tula maintained more self-control than I was capable of mustering at the moment. 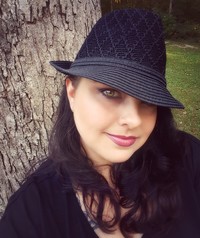 Haven Cage lives in the Carolinas with her husband and son. After many years of dabbling with drawing, painting, and working night shift in the medical field, she decided to try her hand at writing. Unfortunately, her love for books came later in life and proved to add a healthy challenge during her writing journey. Determined to hone her craft though, she soaks up as much information as she can, spends her free time tapping away in her favorite local coffee shop, and keeps a good book in hand whenever possible.

What began as a hobby has grown into a way of escape and the yearning to take her journey farther, her love for writing and reading deepening along the way.