Meet the unforgettable men of London’s most notorious tavern,

with charm and wit to spare, one night with these

rakes and rogues will never be enough…

One Night of Scandal, an all-new standalone

in the historical romance series The Wicked Dukes Club from 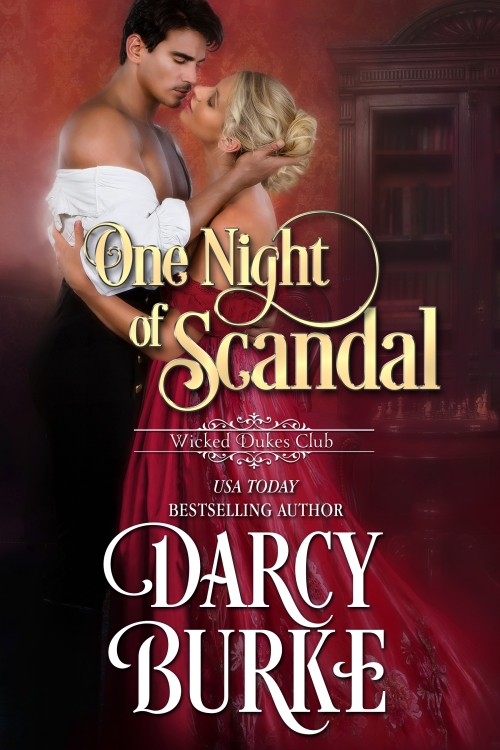 Jack Barrett is an ambitious member of parliament with no time or desire for a wife. When he catches the Duke of Eastleigh’s sister sneaking inside one of London’s private gentlemen’s clubs, he’s shocked—and dangerously charmed—and assumes the role of protector, only to discover she has the means to destroy him.

Social pariah Lady Viola Fairfax masquerades as a man to pen a column in a popular women’s magazine. When she stumbles upon a brewing scandal that implicates a prominent MP, she seizes the chance to establish herself as a real journalist. However, the infuriating and intoxicating man may not be the radical he’s purported to be, and the more time they spend together, the more she risks the one thing she’s sworn never to do: fall in love. 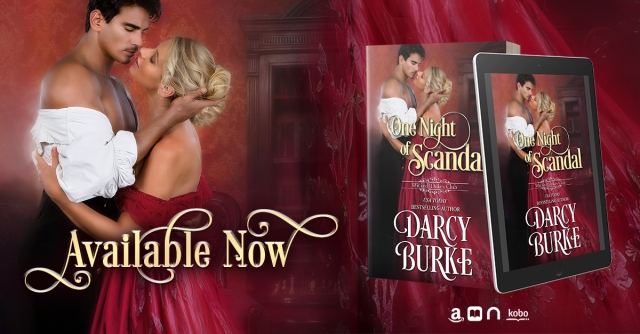 This is book #4 of 6 in this multi-author series. They have all been very enjoyable reads to date. They are tied together by the location of one of London’s private gentlemen’s clubs.
Viola and Jack are meant for each other and this quick and enjoyable read sends us on a romp thru some dangerous places.
I gave this book 4.5 of 5.0 stars for storyline, characterization and plot.
I received a complimentary ARC of this book and the others so far in this series to read. This in no way affected my opinion of this book which I read and reviewed voluntarily.

Viola’s gaze kept straying to Mr. Barrett, who stood with a few other gentlemen near the table with the bottle of sand. Garbed in a perfectly tailored black coat with black breeches and a midnight-blue waistcoat, he presented an intimidating and alluring figure. She couldn’t seem to stop glancing in his direction.

He didn’t appear to be aware of her presence, not after looking right at her and walking away. Was he purposely ignoring her? It was probably for the best. And yet, she was vaguely annoyed.

“Pardon me,” she murmured before making her way slowly to the table next to the one where Mr. Barrett stood. She picked up a shell and held it to her ear.

“Do you hear the ocean?”

She turned her head to see Mr. Barrett had moved next to her. Not that she’d needed to turn to see who it was—she recognized the deep, seductive timbre of his voice.

“Yes.” She handed him the shell.

He put it to his ear, and a half smile tilted his lips. Viola’s chest tightened in reaction. “It’s magic,” he said before replacing the shell on the table.

“It’s actually the noise from the room gathering in the shell and bouncing back to your ear.” Why had she said that? Magic sounded rather charming.

He chuckled. “I know what it is. But I like to think it’s the ocean. I haven’t been there in some time.”

“I love its vastness and the never-ending rush of waves over the shore. It makes me think of how complicated and yet simple our world can be.”

“That’s rather contradictory,” she said, picking up a rock that had been smoothed by the waves he spoke of.

“Life is full of contradictions, wouldn’t you say, LadyViola?” He was referring to her disguise as Tavistock. She suppressed the urge to smile.

“It can be, yes. So this is why you couldn’t meet tonight?” she asked quietly.

“Yes. And it seems you weren’t available either.”

She put the rock back down and moved around the table so they could put some distance between themselves and other guests. “I hadn’t planned to come tonight, but then decided it was worth trying to learn anything I could about our…project.”

He nodded twice, slowly. “Yes, our project. We should perhaps develop a strategy for tomorrow night. I will ensure Pennington will be there.”

“Excellent, I do think he is our best hope for delving deeper into things. We need to find out how he heard this rumor.”

“Agreed. He typically likes to talk, so it shouldn’t be too difficult.”

Viola didn’t disagree, but she wouldn’t leave things to chance alone. “And if he’s being closemouthed, we’ll pour ale down his throat until he speaks.”

Mr. Barrett’s dark eyes widened very briefly. “You wish to get him drunk?” He kept his voice low.

Viola lifted a shoulder. “If we must.”

“Diabolical,” he said. “I like it. Tell me, Lady Viola, have you ever been drunk? It seems as though you must have, given your frequent visits to the Wicked Duke.”

“I am careful not to overimbibe. Indeed, I rarely finish an entire mug of Colehaven’s marvelous ale.” She shook her head with regret. “It’s a crime.”

“To answer your question, yes. I have been drunk.” She narrowed her eyes at him, but not in anger or disgust. “That is not a question you should ask a lady.”

“I’m sorry,” he whispered. “I should have said, ‘Tell me, Tavistock, have you ever been drunk?’” His eyes glowed with mirth, and she felt herself responding to his good humor.

She angled her head to a saucy tilt. “No.”

“So you’ve been drunk as Lady Viola, not as Tavistock.” He studied her intently, and her toes had the audacity to curl in her slippers. “Fascinating.”

“You are a woman dedicated to investigation, it seems.”

She was more than impressed with his estimation. She was…flattered. “That is an excellent way to describe me.” She tried to think of how she would describe him and wasn’t sure. Not yet. But they’d be spending plenty of time together, probably. Unless they unraveled the entire mystery tomorrow night.

She realized she didn’t particularly want to. It might be fun to be on the hunt with Mr. Barrett.

Darcy Burke is the USA Today Bestselling Author of sexy, emotional historical and

contemporary romance. Darcy wrote her first book at age 11, a happily ever after about a swan addicted to magic and the female swan who loved him, with exceedingly poor illustrations. Join her reader club at http://www.darcyburke.com/readerclub. A native Oregonian, Darcy lives on the edge of wine country with her guitar-strumming husband, their two hilarious kids who seem to have inherited the writing gene, two Bengal cats and a third cat named after a fruit.

Stay up to date with Darcy by joining her Reader Club today: