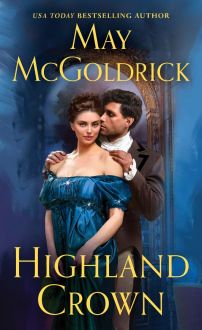 Miss Amanda Waters knew full well that a rake should not be trusted. But when a severely wounded Lord Warwick crashed through her front door, bleeding, and asking her to keep his secret. What choice did she have?

Heaven help her if anyone learned she was nursing a British Lord back to health in her upstairs bedroom. Her friends would disown her and most of the ton would think her a fool. But when she discovers Lord Warwick’s true mission, she has no choice but to help.

Lord Warwick never expected to need the help of someone like Miss Waters. But his mission was too important. England’s very survival rested in the balance.

The fact that it might cost him his heart was immaterial. Some things cannot be denied.

From USA Today Bestselling Author May McGoldrick, a story of two Highlanders in a strange and hostile land…

A novel rich with love, intrigue, and ruthless ambition in the court of Henry VIII—the story of two Highlanders in a strange and hostile land…

Jaime Macpherson learned the meaning of betrayal on the Isle of Skye when her beloved Malcolm MacLeod wed another woman to save his inheritance. Her dreams of happiness crushed, she sought refuge in the elegant palace of the Duke of Norfolk.

There Jaime would find Malcolm again, a prisoner in the castle dungeon. In the icy darkness, she learns how to love again. But with England and Scotland at war, her bold scheme to free Malcolm would imperil her own life…though her passion swept her onto a battlefield of blood and tears where only a brave and true heart could save her…

STARTING THE COUNTDOWN FOR

Book One of the

this is Highland romance at its breathtaking best.

Perched on the North Sea, this port town—by turns legendary and mythological—is a place where Highland rebels and English authorities clash in a mortal struggle for survival and dominance. Among the fray is a lovely young widow who possesses rare and special gifts.

A true beauty and trained physician, Isabella has inspired longing and mystery—and fury—in a great many men. Hunted by both the British government and Scottish rebels, she came to the Highlands in search of survival. But a dying ship’s captain will steer her fate into even stormier waters. . .and her heart into flames.

Cast from his home as a child, Cinaed is a fierce soul whose allegiance is only to himself. . . until Isabella saved his life—and added more risk to her own. Now, the only way Cinaed can keep her safe is to seek refuge at Dalmigavie Castle, the Mackintosh family seat. But when the scandalous truth of his past comes out, any chance of Cinaed having a bright future with Isabella is thrown into complete darkness. What will these two ill-fated lovers have to sacrifice to be together…for eternity?

This sweeping Scottish Historical romance is filled with historical pageantry at it’s best.

In the vein of Diana Gabaldon’s Outlander Series this is a can’t put down read. I literally read this sweeping romance in two sittings.

The book starts at Inverness, of 1820 and carries our heroine to the highlands to hide from her would be assailants.

There Isabella can not turn away the man she finds on a beach and in dire straits likely dying.

Who is this man actually? Why would he help her other than the fact that she saved his life?

The McGoldrick husband and wife team of authors have once again written a winner.

I gave this book 4.9 of 5.0 stars for storyline and character development.

This book is not to be missed by fans of historical fact woven with mythical Scottish romance.

I received a complimentary digital ARC of this book by invitation from the publisher.

This in no way affected my opinion of this title which I read and reviewed voluntarily.

Sign up for the newsletter and get a free ebook.

USA Today Bestselling Authors Nikoo and Jim wrote their first May McGoldrick romance using historical figures that Jim researched while earning a PhD in sixteenth-century Scottish and English literature. Nikoo, a mechanical engineer, is a born storyteller. She is all about characters and feeling. Jim is about action and sense of place. Together, they have crafted over forty fast-paced, conflict-filled historical and contemporary novels and two works of nonfiction under the pseudonyms May McGoldrick and Jan Coffey.

Their stories have touched the hearts and minds of millions of readers all over the world. Their work has been translated into over a dozen languages, and counting. Because of their success, they have been frequent guests on local and national radio and television. They travel regularly, speaking at writers’ conferences, libraries, classrooms, and book group gatherings.

For the past decade, Nikoo and Jim have been conducting workshops bringing 21st century collaboration and writing skills to students and teachers.

These popular and prolific authors write historical romance, suspense, mystery, and young adult novels. They are four-time Rita Finalists and the winners of numerous awards for their writing, including the Romantic Times Magazine Reviewers’ Choice Award, the Daphne DeMaurier Award, three NJRW Golden Leaf Awards, two Holt Medallions, and the Connecticut Press Club Award for Best Fiction. Their work is included in the Popular Culture Library collection of the National Museum of Scotland.

Nikoo & Jim now reside in Southern California where Nikoo writes and Jim gazes out at the Pacific (Nikoo’s side of the story (-: )

Nikoo and Jim love hearing from their readers and can be contacted through their website http://www.MayMcGoldrick.com
Twitter: @maymcgoldrick

Visit their website for family trees of their books and latest giveaways.