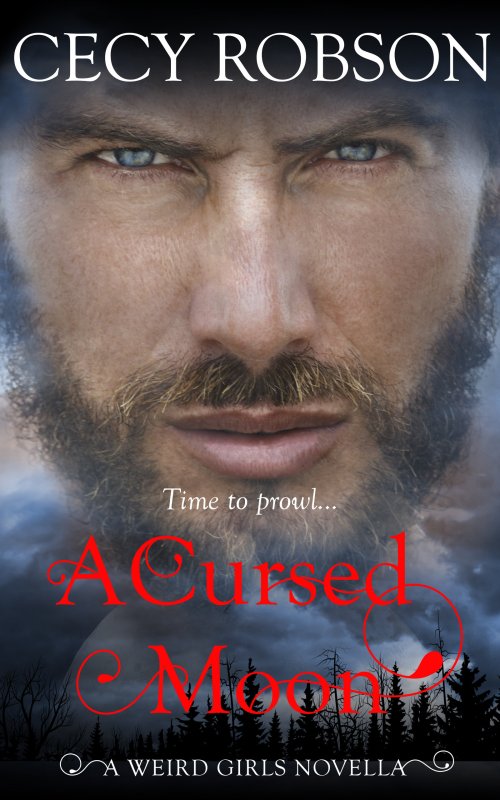 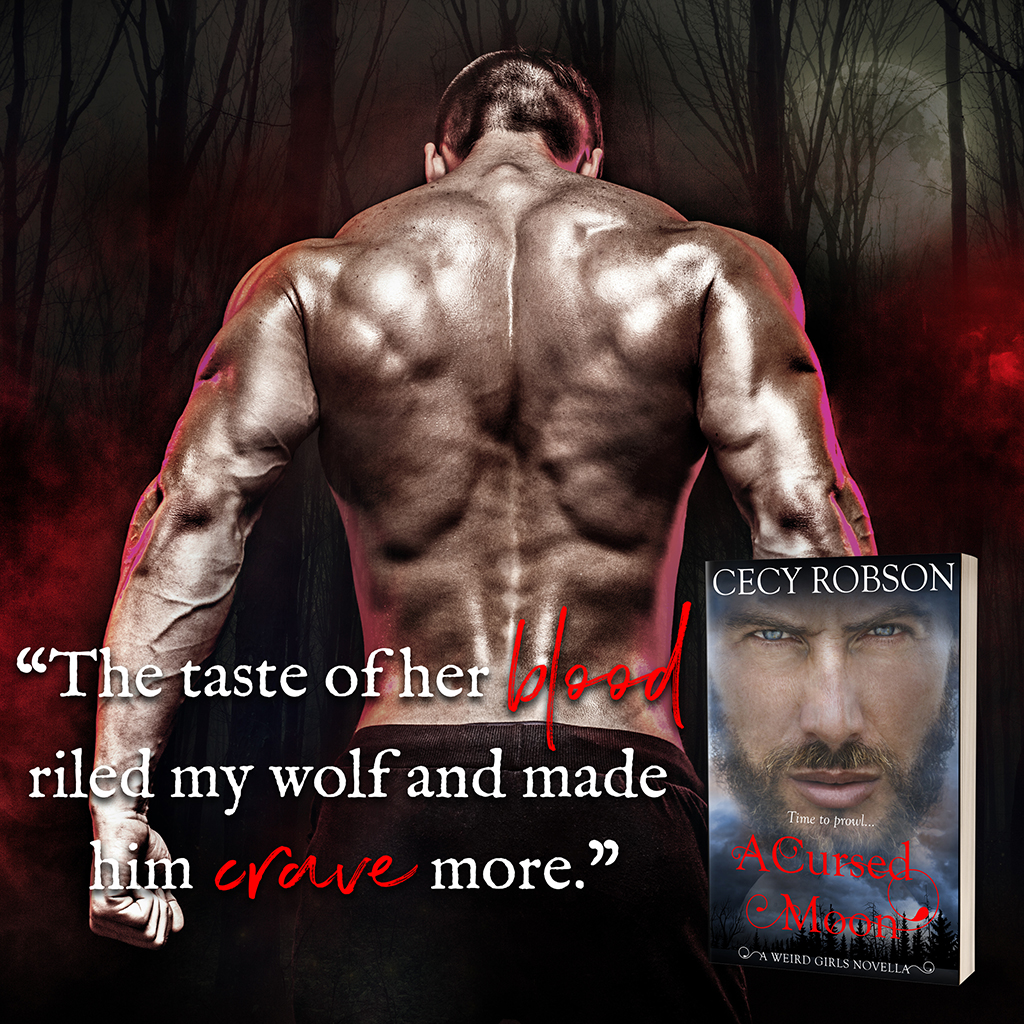 Meet the furry big brother that the Wird sisters never had… 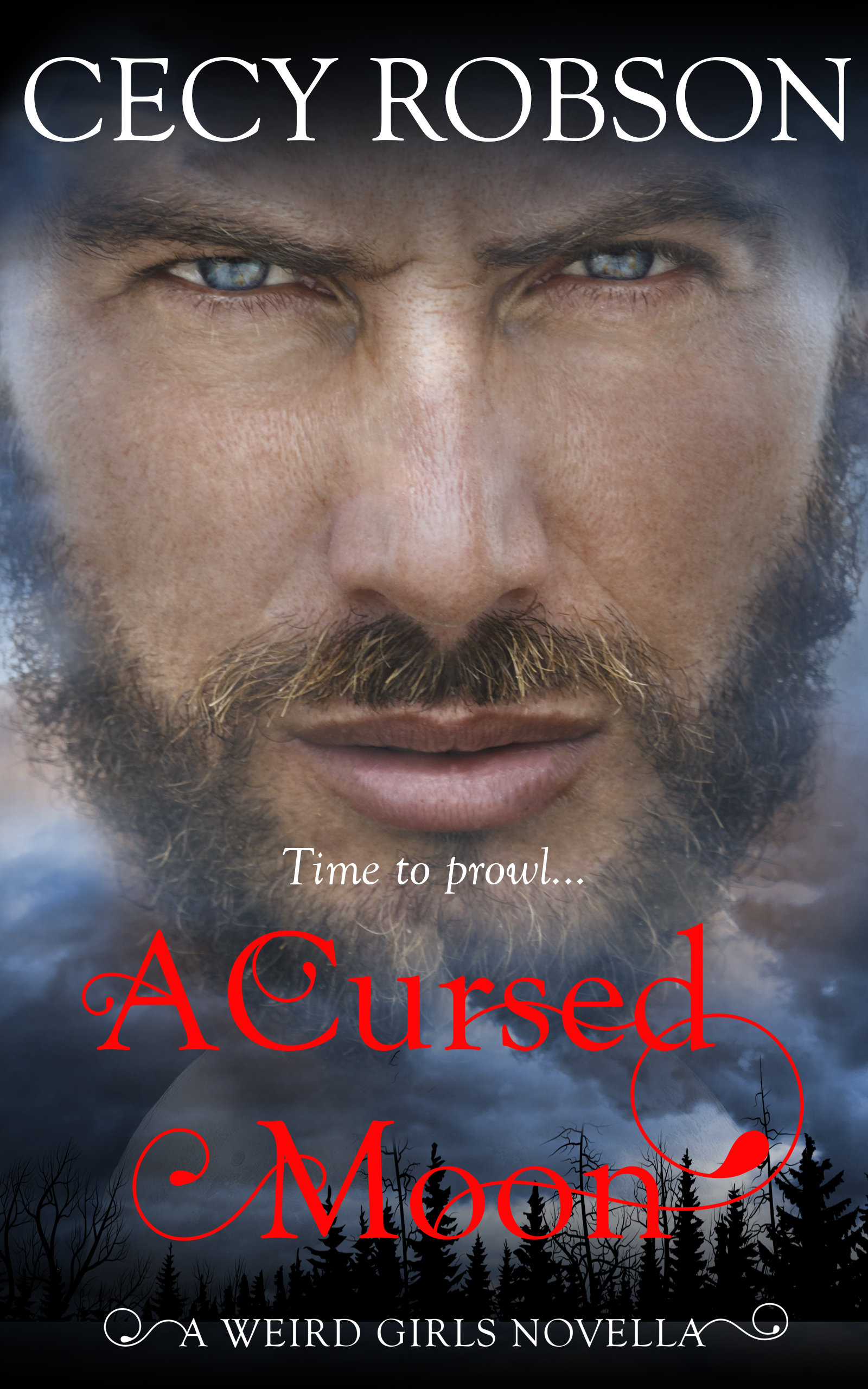 Bren is a cocky, brash hound of a werewolf who loathes the idea of belonging to Aric’s pack—much less finding a mate. But Bren’s hotheaded behavior lands him in the doghouse when he defies Aric’s authority in front of his pack, bringing up a sore subject that’s bound to make the Alpha wolf’s blood boil…

Luckily for him, no one can stay mad at Bren and his wild charm for long. And when some frightening ghosts launch a hostile paranormal takeover, Bren will team up with Celia to take down the evil ghouls before they hurt someone they both love…

“Hmmph?” Someone with a death wish was shaking me. You don’t disturb a werewolf’s sleep; that’s just common fucking sense. The breeze shot through the cracked opened window, bringing a strong whiff of Tahoe’s magic. I grinned and inhaled. That shit was better than witch ganja, and it lulled me back to sleep.

But then Dan flipped on the leg lamp on my nightstand and opened his yap again. “Wake up, I mean it.”

“You can take that werewolf shit and shove it up your ass.”

That made me chuckle into my pillow. Dan swearing was damn funnier than Elmo dropping the “F” bomb. He shook me again, this time harder. I flipped over and tried to get comfortable.

“It’s my goddamn room. I can sleep naked if I want. And what the hell do you mean by ‘stuff’? What are you, ten?”

Dan ignored me. “Bren, your stupid one-night stand stole all our food, our DVDs, and our laundry detergent.”

I half-opened one eye. “Wendy wouldn’t do anything like that.”

“Her name was Natasha.”

“That’s the name she wrote all over my bathroom with her lipstick.”

“No. For shit’s sake I’m hungrier than hell. How are you going to fix me breakfast without any food?”

Dan threw his hands in the air, in that same exaggerated way he always did when I pushed him to his breaking point. He kicked my dirty clothes on the floor and paced like an expectant dad. “You have the audacity to think I’d actually cook you breakfast—after what your one-nighter did?”

I scratched my beard. Damn, I needed a trim. “Well, yeah. It’s your job around here, you’re the woman. You’re supposed to cook, clean, and pay most of the bills. My job is to keep your ass safe from humans, vamps, weres, witches, little old ladies, and pretty much anything else you’re afraid of. It’s part of our deal, along with me getting you laid.”

Dan stomped to the side of my bed, stumbling over a pair of my old jeans. “First of all, it was just that one little old lady. I may be human, but I’m pretty sure she was some kind of spirit―especially given the amount of supernatural activity around here lately. Secondly, I don’t need help getting laid.”

I stared at my beanpole roommate. His messy curly hair hung over his thick black-framed glasses, and he tripped over air on a regular basis. Jesus. There were Girl Scouts more muscular and agile than him. “Yes, you do, Dan.”

“I’ve gotten laid a lot lately, all without your help.”

I laughed and yanked at my overgrown hair. Damn, I needed a cut, too. But unlike Dan, I did grunge well. “Celia was more than eight years ago.” I chuckled again. Talk about a mercy lay.

He narrowed his eyes. “What’s so funny?”

“I still can’t believe you were her first. How’d you talk her into it? Did you promise to tutor her in chemistry or something?”

Dan’s entire face reddened, making him look more like a tomato than a walking piece of broccoli. “Whatever, Bren. I’ll prove to you I can get laid.”

“Sure, sure, you can get laid. Don’t get your thong in a bunch.”

Dan stamped his foot. Shit, I only thought girls did that.

“I mean it, Bren. I have to work late at the lab tonight, but I’ll meet you at eleven at the Watering Hole. I’m going to get a girl so hot your head will spin.”

“Dan, you don’t want to bet me on something like that. You’ll only lose and embarrass yourself.”

“You’re just afraid. I thought you were a wolf, not a chicken.”

My brows furrowed and I snarled. “Did you just call me a chicken?” This time it was Dan’s turn to laugh. I could be pretty damn intimidating, but he knew I’d never hurt him. He was a mothering pain in the ass, but also the best friend I’d ever had.

A slow grin eased across my face. “All right then, name the terms.”

“Is that the best you can come up with? Oooh, I’m real scared now.”

“. . . wearing a French maid outfit, regardless of who’s in the apartment.”

My grin widened. The little turd had some balls after all. “You’re on.” I held out my hand. He refused to shake it until after I showered.

Cecy Robson is an author of contemporary and new adult romance, young adult adventure, and award-winning urban fantasy. A double-nominated RITA® Finalist, Winner of the Gayle Wilson Award of Excellence, and published author of more than twenty titles, you can typically find Cecy on her laptop or stumbling blindly in search of caffeine. 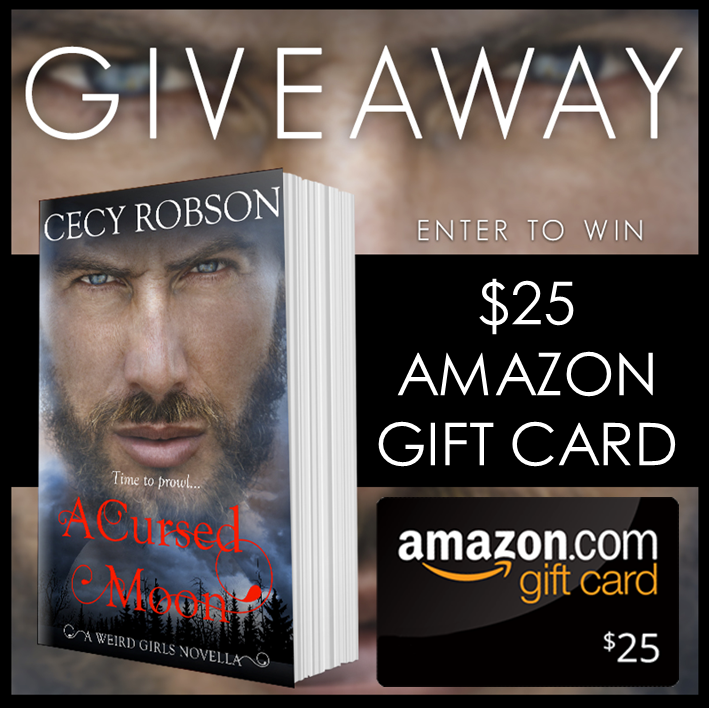 TO TAME A SAVAGE HEART 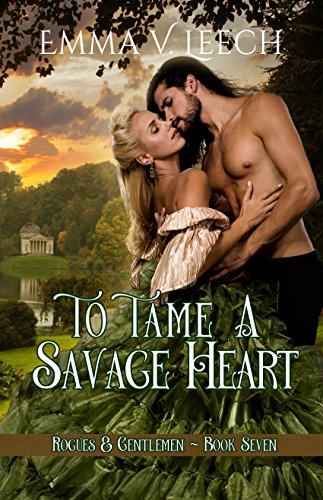 Lucretia ‘Crecy’ Holbrook has a secret, a secret she has kept for many years. Even her dearest confidant and sister, Belle, would not understand what Crecy is prepared to do, the risks she is prepared to take, to get her heart’s desire.

For Crecy is not like the other smiling débutantes; she despises poetry, thinks dancing a chore and is quite prepared to throw something at the next fool to compare her to Aphrodite.

Far more likely to return from a country walk with a badger’s skull and some bloody, injured creature than a posy of wildflowers, Crecy is drawn to the dark, the damaged, and the unlovable.

Her heart longs for one man alone, one with a wounded soul, one so dreadfully damaged that even her tender care might not be enough to save him.

Viscount Demorte is everything she dreams of.

With a reputation that covers blackmail, murder and madness, cruelly handsome Lord Gabriel Greyston, Viscount Demorte, is far more dangerous than any wounded dog, and his bite … just might leave Crecy ruined beyond repair.

TREAT YOURSELF TO A NEW RELEASE!

Marooned with a Marquis 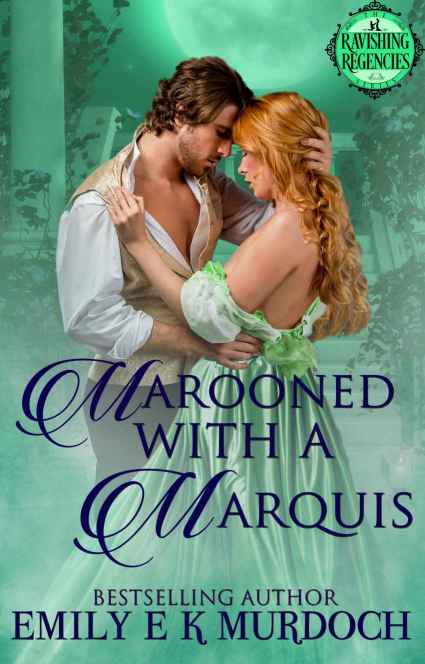 A man with something to hide, and a woman with nowhere to go – and neither can leave the island until morning…

Luke, the Marquis of Dewsbury, is a complete rogue. Bested by none and adored by many, he finds himself sent away from town by his embarrassed father where he discovers the young and innocent Miss Adena Garland.

At only eighteen years old, she becomes his unlikely companion as they become trapped on an island after high tide.

The night is long, and likely to be cold – but the heat rising between Miss Garland and the Marquis of Dewsbury could keep both of them warm.

Will Luke continue his stream of conquests? Or will Adena find being marooned with a Marquis enough to give into temptation?

This is the fourth in a series of eight Ravishing Regencies.

This is a steamy Regency romance with a happily ever after, no cliffhangers, and part of a series that can be read in any order.

The Return of Lady Jane 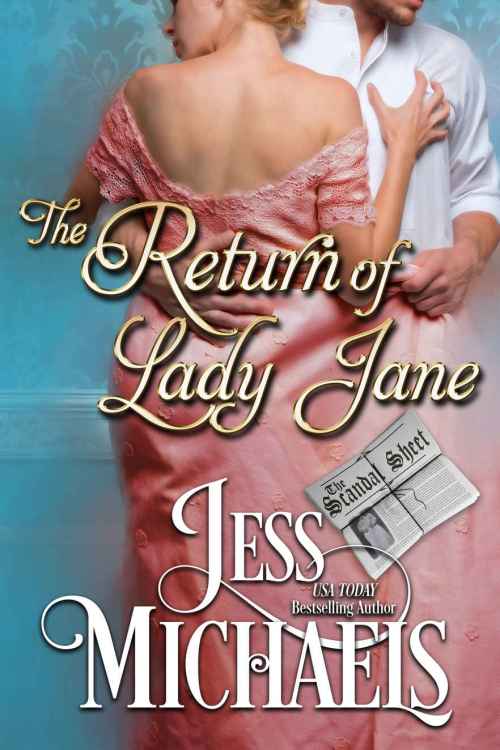 After a surprisingly passionate wedding day, Viscount Colin Wharton begins to believe he could overcome a painful betrayal in his past and truly make a future with his new wife Jane. But a shocking betrayal crushes his heart. He sends her away, determined to forget her.

Viscountess Jane Wharton has no idea what hardened her husband’s heart to her, but she is trying to make the best of her banishment. When she returns to London, she hopes to simply avoid Colin. But that is not to be. As the couple reunites in a clash of harsh words and heated passions, both begin to wonder if they could overcome the past.

Only a secret lurks that is darker than anything either could have imagined. And they will have to fight to survive, as well as fight for the love they both deserve.

I couldn’t put this book down and finished it in one sitting.
This is book number one in Jess Michaels newest series and not to be missed.
Colin has had no luck with women. Now he is married to a woman that is essentially an arranged marriage orchestrated by his mother.
On the eve of his wedding he thinks his bride has betrayed him with her previous admirer. This is not true but he must believe what his eyes tell him so he sends her away.
Months later when her sister has just delivered a baby Jane returns without notifying her estranged husband.
Will their reunion be one of bliss or headache?
I have this long novella 4.75 of 5.0 stars for storyline and character development and a medium sensual rating of 3.5 of 5.0 flames.
This couple are obviously attracted to each other in spite of their misconceptions.
I received a complimentary digital ARC of book from the author to read via NetGalley.
This in no way affected my opinion of this book which I read and reviewed voluntarily.