The Earl and the Reluctant Lady

He knew he could never have her…

From the very moment Agnes Watkins walked into his life, Fletcher Banks, Earl of Wakefield, has wanted her. Agnes is not just beautiful, she’s clever and determined. Despite her uncommon beauty, she refuses to conform to society’s standards. She’s also the sister of the man who holds Fletcher’s career as a spy in his hands. And that makes her completely off-limits.

She thought she could change him…

Tall, impossibly broad, and handsome as a sin, Fletcher Banks is a brazen scoundrel. Known for his reputation as the greatest lover in London, he’s the only man who’s ever proved a temptation for Agnes. Her duties with the Ladies of Virtue means she can’t overlook his lustful ways. The time has come to reform this rake.

Together their desire is undeniable.

With Agnes setting her virtuous sights on him, Fletcher can’t ignore her any longer. Maybe spending more time with her will release him from his infatuation with her without falling further from her brother’s good graces. But the more time they spend together, the harder it is to deny that this infatuation may be more than lust…

This latest Robyn DeHart, Lords of Vice book is the best so far in this series.
I have read all three books in the series and two others by this author. I have enjoyed them all but must say this one really drew me in.

We met Fletcher Banks, Earl of Wakefield in a previous book. He is known for his prowess with the fairer sex and because of this his assignments as a spy for the crown lean toward extracting information from ladies he takes to his bed. This fact has earned him a somewhat unfair reputation.
Agnes Watkins is the only woman Fletcher has ever really wanted and one he most assuredly can not have.

She’s the sister of the man who holds Fletcher’s career as a spy in his hands. And that makes her completely off-limits.
Agnes as a member of the Ladies of Virtue means to reform the known rake as her next assignment.

Sparks fly when Fletcher is assigned the duty of guarding Agnes.

Will their feelings for each other survive or will her secret suitor win out?

I gave this newest book in this series 4.5 of 5.0 stars for storyline and characterization.. All of the books in this series are standalone titles but do have character tie-ins. Readers of this series had previously been introduced to our hero and heroine and now we get to read their story.

This romance gets a warm sensual rating of 3.0 of 5.0 flames. There is some intimacy but not a great deal.

I received a complimentary ARC of this book from the publisher by invitation to read. This in no way affected my opinion of this book which I read and reviewed voluntarily.

Run On The Wind 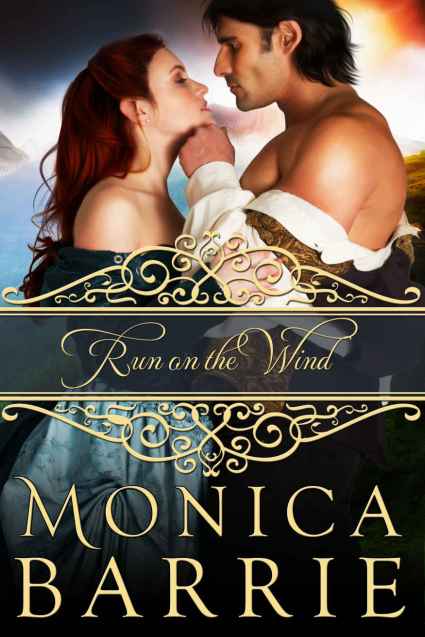 A romance as strong as the rugged Wind River Mountains, a love as dynamic as the old west itself.

19th Century Wyoming was a breath-taking wilderness that inflamed passions. As the Civil war ended, Martin Dowley, the wealthiest rancher in the Wyoming-Idaho territories, seeks to create a royal dynasty. Lara, his beautiful daughter, is to be his pawn; but she refuses to be used for her father’s purposed. Lara yearned to follow her heart, to discover her desire, and to find love .
Captain Kael Treemont was a stranger to the Wind River Mountains, and a man on a quest for vengeance. When he met Lara, they found an understanding and a rapture neither had ever thought possible… Then Kael made a shattering discovery that threatened their newly found love.
Lara had a secret as well, one she would not reveal until Kael’s soul was free. Only then could they pursue their dreams together.

FREE To Read With

An Intriguing Proposition (novella length) takes you on a fast-paced carriage ride through the streets of Victorian Boston.

Insidious blackmail, the threat of foreclosure, and a fake engagement—all in one week!

Elise Malloy will do anything to protect her well-bred Boston family—even marry a stranger! Faced with overwhelming debt and threatened by the man she trusted, she fights to save her home from foreclosure and her beloved brother from ruinous disgrace.

Once upon a time, upright banker, Michael Bradley did the unthinkable. He humiliated the lady whom he greatly admired. Now, he only wants to make amends by helping her out of a sticky situation and tell her his heart’s true intentions.

Someone has an old score to settle.

When villainy of the worst kind seeks to destroy the Malloy family—and trap Elise in a loveless marriage—can Michael convince Elise to accept his own Intriguing Proposition?

“…a glittering tale of star-crossed lovers, threatened by a web of lies… a great new book in a new series.” ~Adrienne deWolfe, bestselling author of Scoundrel for Hire

“…a tantalizing glimpse of the author’s delicate writing style as she melds romance with humor, conflict, and adventure. An entertaining read.” ~ Award-winning, bestselling author, Marliss Melton

How could a well-bred, intelligent woman not want two adorable children?

That’s what attorney Reed Malloy asks himself after an exhausting train ride from Boston to a dusty Colorado town with two orphans in tow. He’s not prepared for Miss Charlotte Sanborn, who wears her independence like a suit of armor, cloaks her identity behind her pen name, and flat out refuses to raise her kin!

Of all the gall! How dare this man stride into her home and expect her to rearrange her life?

Charlotte won’t risk any more heartache, not after raising her brother by herself and watching him leave. So why do these children and this handsome stranger awaken a yearning for something more than the life she has painstakingly created?

One letter changes everything…

“…the ending was perfect… Many wonderful characters including nasty villains and villainesses. I had a hard time putting it down!” ~ Lady McNeill, Mrs. Condit, & Friends Read Books

“Delicately crafted, deliciously told. A book that transports you to a time and place from which you won’t want to return.” ~ Award-winning, bestselling author, Marliss Melton 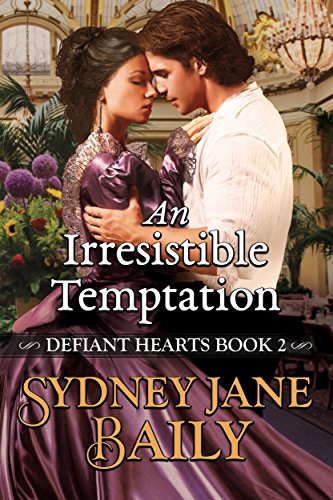 Boston-born Sophie Malloy is running from heartbreak — and now she’s covered in dirt and sprawled at the feet of a man with a devastatingly sexy smile. Can’t a classical pianist catch a break? She hopes so, once she gets to bustling San Francisco on the sparkling bay. Riley Dalcourt is stunned by his attraction to the sweet-tempered beauty who enters his life so unexpectedly, but his life is planned out, right down to the woman he’s supposed to marry. Is this a true love worth fighting for or merely An Irresistible Temptation?

“You are pulled in from the first paragraph to the last…you even find yourself at the end wanting more.”

“A beautifully written love story that takes place in the 1880s.”

“One of those books that I couldn’t put down and had to finish in one sitting.”

Hop a train but keep your head down – there are bad guys coming up fast in An Inescapable Attraction where danger is always a hoofbeat behind.

Of all the boxcars, she had to be on this one!

Thaddeus Sanborn has always loved Eliza right up until the time she agreed to marry his best friend and shattered his heart. Heading West to claim his fortune, she is the last person he expects to find hitching a ride on a train and running from a deadly gambler.

She gambled with the wrong man!

In a year of roaming the West, angel-faced, sharp-tongued Eliza Prentice encountered card sharks and low-life gamesters, all the while trying to forget the searing brand of one man’s fiery kisses. Now, a single high-stakes poker game has her running for her life.

All or nothing with everything to lose . . .

Steam trains, swift horses, and even a graceful riverboat keep this pair on the move while trying to evade dangerous men and wanton women. In ultimate high-stakes trouble, with their passion smoldering at a scorching level, Eliza and Thaddeus can’t run from An Inescapable Attraction.

An Inescapable Attraction is Book 3 in the Victorian-American series Defiant Hearts. Engaging characters, attention to period detail, and sensual romance—all in this series by highly acclaimed writer Sydney Jane Baily.

“Utterly captivating! Very gripping right from the beginning to the end.”

“You can’t help but root for the characters who are richly developed which makes the romantic scenes ever so electric.” 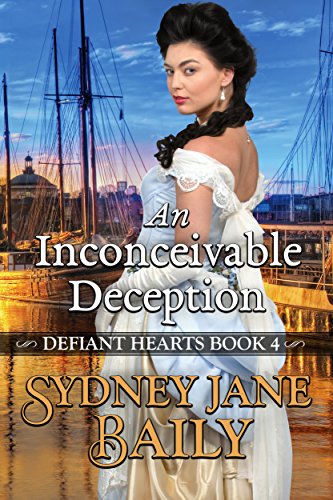 Hobnob with 19th-century Bostonians in An Inconceivable Deception and detour to the bustling wharves where both menace and miracles transpire.

She has loved and lost, or has she?

Secretly wed yet abruptly losing the man of her dreams, high-spirited Boston society girl Rose Malloy never loved before and vows never to love again. She slips into private sorrow until a special man captures her fragile heart.

What can he do to make her smile again?

William Woodsom noted the inexplicable withdrawal of the girl who’d dazzled Boston’s elite, and he’s determined to coax light and laughter back into her sapphire blue eyes. He’ll do anything for her, except take second place in her heart.

When the past resurfaces—bringing lies, conspiracy, and murder—Rose finds her world falling apart for the second time in her young life. Keeping secrets is no longer an adventurous game. Can Rose prevent further heartache, not only for herself but for the man she loves, or will their future be destroyed by An Inconceivable Deception?

An Inconceivable Deception is Book 4 in the Victorian-American series Defiant Hearts. Engaging characters, attention to period detail, and sensual romance, you’ll find it all in this series by highly acclaimed writer Sydney Jane Baily.

“Another fun historical romance from Ms. Baily that wonderfully captures Boston in the 1800s. I couldn’t put it down!”

“Another ‘escape from reality’ saga that features strong women with real issues.”

“This book took me on a rollercoaster ride of emotions.” 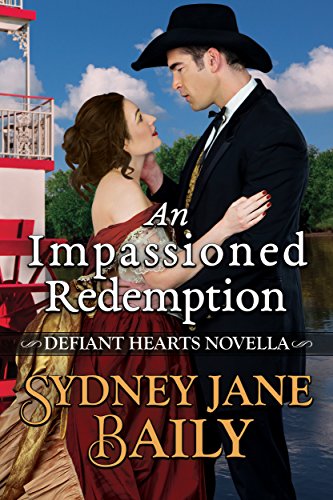 Take one sinfully handsome riverboat gambler, add a smart and stunning madam, and stir them up with murderous foul play and sizzling romance in An Impassioned Redemption.

Self-made woman, Josephine Holland answers to no one.

Owning a successful saloon and bordello, Jo keeps wayward women off the streets. Unlike her girls, she neither needs nor wants any man. That is, until she meets the wickedly attractive and intriguing Jameson Carter.

From atop his lively riverboat, Jameson rules what he sees, and he has his sights set on one delectable lady. His odds of winning Jo’s affections are suddenly stacked against him, when a sequence of threatening events puts more than his heart in jeopardy.

An unknown foe with a grudge and a trigger-happy finger . . .

With their lives in danger, Jameson hopes to beat the odds and come out on top. Can Jo play the part of Lady Luck and save them both or has fate rolled the dice against them? Find out in An Impassioned Redemption.

An Impassioned Redemption is a Western-themed stand-alone novella in the Victorian-American Defiant Hearts series. Engaging characters, attention to period detail, and sensual romance, you’ll find it all in this series by highly acclaimed writer Sydney Jane Baily.

“Had me reading and holding my breath waiting to see what was going to happen.”

“Loved spirited Josephine, a heroine who could take care of herself!”

“Enjoyable, sexy romance with enough adventure to keep me turning the pages.”