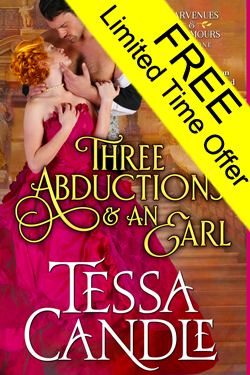 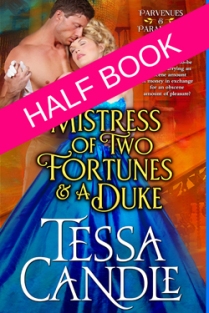 Three Abductions and an Earl 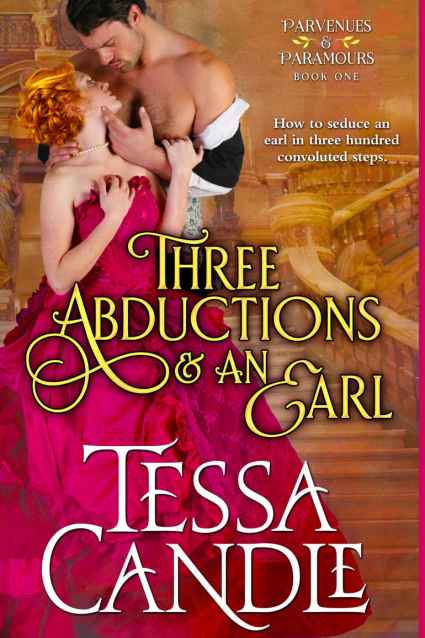 London-hating dreamer, Lydia Norwood, has failed spectacularly as a débutante. Now an encoretante whose family has lost a fortune, Lydia discovers that the beau monde is hard on a nouveau riche social climber, particularly one who is no longer riche and only wants to climb trees. Lydia must stave off the effrontery of rogue lords and conniving competitors long enough to make a good match, or else incur society’s scorn by by being so scandalous as to earn her own money. Falling for the unattainable Lord Aldley is a distraction she cannot afford. But they share such an enchanted history, how can her heart resist?

The tragically virtuous Earl of Aldley is tired of ambitious families hurling débutantes at his head, but cannot hide in France forever. He returns to London to seek out the mysterious tree-climbing girl who once saved him from a scheming chit, and finds more than he bargained for. Abductions, seductions, trickery and injury all endanger Lydia, but Lord Aldley’s heart is imperiled beyond rescue. He has only just found her; will he lose her forever to his enemy, his best friend, or his own dangerous mistake?

“Along with well-developed characters and an energetic storyline, readers will love the wit, romance, banter, and steam that ensue. …highly entertaining and light-hearted, yet laced with mischief, intrigue, and characters that did what they wanted… Readers who love regency romance brimming with wit and a touch of unexpected twists, will not be disappointed.” —Dahlia Gosney, InD’tale Magazine

Three Abductions and an Earl is a full length Steamy Regency romance novel and Book 1 in the Parvenues & Paramours series. 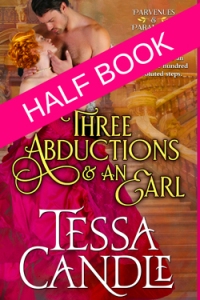 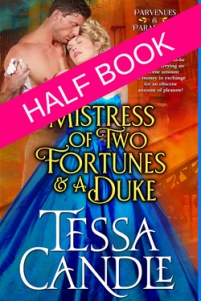 Mistress of Two Fortunes and a Dukeis a full length Steamy Regency Romance novel and Book 2 in the Parvenues & Paramours series.

Parental neglect and new money have been the making of parvenue heiress and incorrigible do-gooder, Tilly Ravelsham. She is bent on relieving poverty and forwarding the cause of liberty by whatever means necessary. True, she dabbles in the demi-monde. True, she breaks into houses. True, she conducts scandalous enterprises and an affair that could ruin her socially, if her enemy exposes her. But is that all so very wrong?

Despite falling in love with Mr. Rutherford, a delicious man about town, Tilly is bound in a secret pact to the man about to marry her. She didn’t mean to fall for Rutherford, and breaking his heart is making her wretchedly unhappy. Then she realizes that she has crossed a line, that her actions and influence are slowly destroying him.

She knows she should set him free, so that he might be happy with another. But her heart refuses to let go, and Tilly is growing tired of making sacrifices so that others may find happiness when she is miserable.

Reluctant duke-to-be, Mr. Rutherford, has his life turned upside-down by the most fascinating, tempting and shocking woman he has ever met, leaving his heart utterly smitten. But as merely seducing her has proved ineffective, Rutherford must find some other way of convincing her to marry him before she makes it to the altar with her rich-as-a-prince fiancé.

When Rutherford’s love for the adventuress of his dreams gets him stabbed, pistol-whipped, unlawfully confined, and almost framed for a capital offence, will he conclude that there is such a thing as a young lady who is too interesting? Will he turn to the mysterious, beautiful widow his uncle has made him swear to protect?

And will a concealed pregnancy or a murder be the powder keg that blows all of Tilly and Rutherford’s plans and secrets wide open?

The latest of these is Book 3 of the Parvenues & Paramours series, Three Masks and a Marquess. Read more about it, or get it now at a special pre-order price!

Three Masks and a Marquess is a full length Steamy Regency Romance novel, and Book 3 in the Parvenues & Paramours series.

Can the marquess solve the riddle of the widow’s past before her enemy finds her?

The mysterious and desperate Widow Colling is not all she seems. She is not even the Widow Colling. But she can hardly be blamed for assuming false identities: it is the only thing keeping her alive.

Her mission is simple. She must only avoid detection, dodge the merciless pursuit of the most notorious madam in London, and stay alive until her twenty-first year. Then she can get her life back—or at least make a new one for herself, perhaps even have the home she has always longed for.

The intrusive marquess-next-door is not making it easy for her, however. He is determined to find her out, and she will do anything to evade him, including hiding in plain sight, right beneath his patrician nose. This subterfuge may conceal her face, but it exposes her heart. When she discovers she no longer wishes to hide, will she risk revealing herself to him and put her future happiness, her very life, under his power?

Frobisher, the self-indulgent Marquess of Fenimore, is also not all he seems. A resolute bachelor, he poses as a dour woman-hating curmudgeon to repel the incessant onslaught of ruthless debutantes and pushy mothers. But going into hiding at his country estate leaves him utterly bored.

The case of the vanishing widow presents a charming diversion. He loves a mystery and secretly cannot resist the allure of the one woman who decidedly does not want his attention. When he discovers the heroine behind the mask, she will challenge his own identity and shatter all his pretenses. But will she also shatter his heart with one final deception and the ultimate disappearing act?

This book will be available as a half-book free download, after the new release month.
Why half-books? Because, although Tessa puts a lot of work into writing the best, most entertaining Regency Romances that she can, how do you know if you will like them or not?

Her half books let you try before you buy. And then, if the book is your cup of tea (or glass of champagne) you can go buy the whole book from you favourite vendor. Win win!

The most recent version includes a glossary of terms.

Nature-loving Elizabeth Whitely is thrust from her sheltered country life in England when the suspicious death of her parents leaves her at the mercy of her father’s mad last testament. She is sent far away to live with her aunt and uncle.

The handsome Viscount Canterbourne rescues Elizabeth from ruffians, and his mysterious story captivates her imagination. His heroics and kindness captivate her heart.

But when she encounters the nightmarish Lord Orefados and realizes the mage has imprisoned her friend in the remains of an ancient abbey, Elizabeth hurtles into a maelstrom of peril and dark sorcery. Can she fight the magician’s madness, or will she be drawn into his strange rites? Will her love be Lord Canterbourne’s boon, or will Elizabeth become the chain that binds him to Orefados forever?

Lord Canterbourne is full of pain and questions at the loss of his estranged father. He seeks answers in his father’s testamentary letter, but it merely sends him on a fool’s errand to deliver a box (which he must never open) to a man he has only ever seen once: shadowy, eccentric Lord Orefados.

He meets Elizabeth and they share an instant connection. Who else can understand his heart but a woman who has also been at the whim of paternal madness, a woman who also bears the stigma of a paternal oddity? Canterbourne knows that they are destined for one another, fated to meet.

But when he discovers his dark family history and a secret wrong against Elizabeth’s parents, Canterbourne fears he can never tell her the truth. Yet, if he doesn’t, he could lose her to the ensorcellments of Orefados, whose obsession with an outlandish ritual is reaching a fever pitch.

Will seducing Elizabeth be the only way to cut her off from Orefados’ spell? Will their love deliver them from evil, or will their secrets seal their doom?

All of Tessa’s Books are also available here:

In the Mood Fur Love

Bearing His Touch by Eve Langlais
When Becka manages to escape her kidnapper, she finds herself asking help of the man with the nice brown eyes. Stavros can’t say no, not when he knows Becka is his mate, but he does have one dilemma when it comes to claiming her. He’ll have to find a way for her to bear his touch.

Fake Mated to the Wolf by Milly Taiden
Looking for a mate to bring to a party? Wedding? Holiday gathering? Mates Fur Hire is right for you? But what happens when your fake mate ends up being your real one, from New York Times bestselling author Milly Taiden!

The Witch, The Werewolf and The Waitress by Kate Baxter
For centuries, Lowman, Idaho has been Ellie Curtis’s prison. A vengeful witch cursed her with immortality and locked her within the confines of Lowman’s borders, sealing Ellie off from most of civilization for eternity. She’s learned to make the most of it. But when she meets a cocky werewolf who’s part of the elite supernatural law enforcement group, all bets are off…

Colin instantly knew that Ellie was his mate, but when he discovers her secret, he’s determined to help set her free. But in doing so, he might just lose the one thing he knows he can’t live without…

This isn’t my preferred genre but these stories will keep you On the edge of your seat and the pages turning.
Suspenseful paranormal tales with a multitude of shifters by three authors previously unknown to me, this collection is a must read for fans of the genre.
1. Bearing His Touch by Eve Langlais
My Thoughts:
This one started out full of danger and suspense and turns quickly toward the comical side with the introduction of Stvros’ interfering family. Becka manages to escape her kidnappers but runs smack into another dangerous individual when she meets Stavros or did she?
I gave this comical read 4.25 of 5.0 stars.

2. Fake Mated to the Wolf by Milly Taiden
My Thoughts:
This is the second comical and quirky read in this set. It involves a Shifter Dating service and has a feel of a friends to lovers story. It gets 4.0 of 5.0 stars.

3. The Witch, The Werewolf and The Waitress by Kate Baxter
My Thoughts:
This story was more on the intense side with a heroine who has been cursed for centuries by a witch. Although it has a more intimate nature, I couldn’t like this story as much as the others and gave it 3.75 of 5.0 stars

I gave these books 4 of 5 stars for plot, storyline and character development and an overall sensual rating of 3 of 5 flames.
These stories would not be my first choice in reading material but that doesn’t change their appeal.

Are You Ready For Some Spooky Stories For Halloween?

or Some Paranormal Romance books

Just click onto the images above for some freebies!