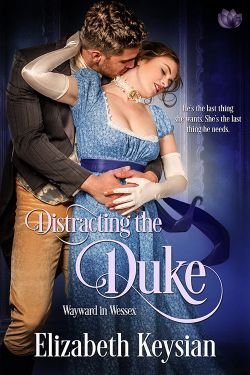 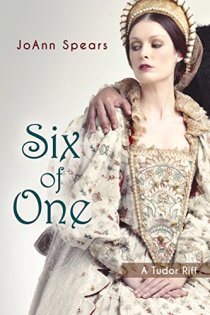 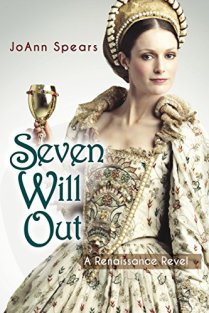 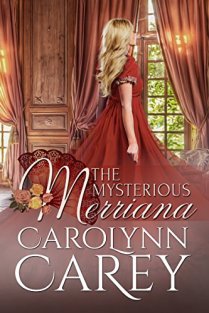 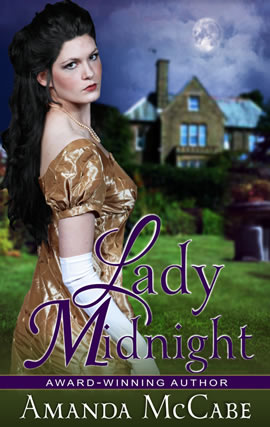 Available in Both Paperback and Digital Formats

Determined to avoid the strife-filled marriage of his parents, Marcus, the Duke of Ulvercombe, wants an amenable, biddable wife, and has set his cap for a certain pretty miss. Unfortunately, her vastly opinionated, frustrating, and lamentably beautiful guardian, Lady Clara Tinniswood, keeps distracting him, tempting him to consider a far more tempestuous—and passionate—union.

Recently widowed Lady Clara Tinniswood wants only to organize a quiet new life for herself, beyond the control of any man. But one shockingly unguarded moment while confronted by Marcus’s gloriously naked body catapults her headlong into a forbidden passion and threatens to undermine all her well-laid plans.

Even if Marcus abandons his sweet ideal and surrenders to his growing desire for Clara, there’s one unalterable issue which could destroy their hopes forever…

New author Elizabeth Keysian has written a delightful debut novel.  I both laughed out loud and cried at times while reading this story.

Lady Clara Tinniswood  is recently widowed and does not desire to remarry. She finds the thought abhorrent as her husband was cruel and she feels most men are of the same nature.
Marcus, the Duke of Ulvercombe, is in search of a wife that is biddable and does everything expected of her, or at least that is what he thinks he wants, until he meets Clara while attempting to court her ward.
Will our hero and heroine find their Happily Ever After or will the secrets that Clara refuses to share keep them apart?
This story is a very well written first published novel by an author that cut her teeth at the Wattpad website where both published authors and newbies try out their story ideas on the general public.
I was amazed at how well thought out the characters and storyline were in this book.
I gave the book 4.5 of 5 stars for character development and storyline. The sensual rating is high with 4.5 of 5 flames.
I received a complimentary digital ARC of this title from the publisher, Entangled Publishing via NetGalley to read and review. This in no way influenced or affected in any way my opinion of this title.

Cornish descent, and an ancestral connection to the Norse god Odin (yes, seriously!). Being an only child gave her plenty of time to read, create imaginary worlds, produce her own comics, and write sketches and a deplorably bad musical intended for an amateur dramatics group.

Three decades spent working in museums and archaeology fired Elizabeth’s urge to write, as did living on a Knights Templar estate, with a garage full of skeletons, a resident ghost and a moat teeming with newts.

Elizabeth lives near Bath in England with her partner and cats. She watches too much television, but still loves to read authors such as Mary Stewart, Jane Austen, Thomas Hardy and Georgette Heyer when she has the time. She cut her teeth on Wattpad and still loves feedback from readers.

“Six of One” is the ultimate ‘girls’ night in’…with the six wives of Henry VIII. It’s the most fun you can have with your nightdress on! Join Dolly, the Tudor-obsessed heroine of “Six of One”, on a Yellow Brick Road journey to the alternate reality of an all-girl Tudor court.

It all begins when Dolly loses consciousness on the eve of her marriage to the six-times- divorced Harry. She awakens in the company of the Tudor women she’s studied all her life. They have a mission to accomplish, and Dolly may be just the girl who can help them do it.

As a warm-up to her life-changing interview with the six wives of Henry VIII, Dolly gets to dish with lots of the other fascinating females of the Tudor era. She learns things she never guessed about the Princes in the Tower from their sister, Elizabeth of York…Henry VIII’s mom. She talks sex with Henry’s sisters and scholarship with his daughters. She even gossips with the help, since Kat Ashley and Bess of Hardwicke are among the ladies on hand.

Of course the heart of the story is in Dolly’s interview with the six wives of Henry VIII. It turns out there’s something to each of the wives’ stories that’s been held back all this time. You won’t believe what really happened…or will you?

“Six of One” offers no tragedy, no excuses, and no apologies. It does have lots of broad humor, not to mention tons of puns. And—for a change—a happy ending.

“The novel is an enthusiastic, well-researched, fictional account of what happened to the infamous wives of Henry VIII.” Kirkus Indie Review

If you thought “Six of One: A Tudor Riff” was the most fun you could have with your

nightdress on, wait until you see what “Seven Will Out: A Renaissance Revel” has in store for Tudors fans and Shakespeare and Marlowe conspiracy theorists.  Get ready for one ‘ruff’ night!

Tudorphile Dolly thought that the night she spent on an astral plane with Henry VIII’s six wives, learning their heretofore unknown secrets, was a one-time thing. Not so! In “Seven Will Out”, Dolly finds herself back in the ether with the women of later Tudor times: Elizabeth I, ‘Bloody’ Mary, Bess of Hardwick, Mary, Queen of Scots, and Anne Hathaway Shakespeare, to name a few. They too have secrets that will turn history on its head, and comic sass that will keep you laughing. And if that isn’t enough, there is even a cameo appearance by Anne Boleyn.

You’ve read all of the traditional, serious and romantic takes on the legendary characters of the English Renaissance. Why not try your Tudors and your Shakespeare with a new and different twist?

JoAnn Spears couldn’t decide whether to major in English or History in college. Life stepped in, and she wound up with a Master’s Degree in Nursing instead. A twenty-five year nursing career didn’t extinguish that early interest in books and history-especially Tudor history. It did, however, stoke a decidedly gallows sense of humor.

Eventually, JoAnn read just about every spin there was on the stories of Henry VIII and the extended Tudor family. Every spin, that is, except the one with the gallows humor. The Tudors certainly qualified for it, but it just wasn’t out there. JoAnn decided that with gallows humor to spare, she would do her best to remedy the Tudor comedy gap. A little inspiration from the classic “Wizard of Oz” showed her the way to go, and “Six of One”, a new kind of Tudor novel, was born.

JoAnn thought “Six of One”, her story about Henry VIII’s six wives, would be an only literary child. Then, two years after its birth, she was caught by surprise with the idea for a sequel. In October, 2015, “Seven Will Out” made its debut and bought the latter-day Tudors into the comedy mix.

JoAnn enjoys writing but maintains her nursing license because a) you never stop being a nurse and b) her son thinks she should be sensible and not quit her day job. She also enjoys life in the beautiful mountains of northeast Tennessee, where she gardens, embroiders antique reproduction samplers, and teaches yoga in her Methodist church basement. JoAnn shares her home with three cats and the works of Jane Austen, Barbara Pym, Louisa May Alcott, and of course, Alison Weir.

Buy For $0.99 in Digital Format at Amazon

A Regency Romance
On his way to France to extract an English agent, Justin Foster, Earl of Cardleigh, stops overnight at his favorite country inn, only to discover a mysterious female in the kitchen. This gorgeous woman claims to be the daughter of an English farmer, but she cooks like a French chef and sings French songs like a native of that land. When Justin learns that the agent who was supposed to travel with him has been mysteriously disabled, he insists the female accompany him to France and serve as his guide.

Having recently arrived in England on a smuggler’s boat, Merriana de Mérchan has no desire to return to France, but the distrustful Earl of Cardleigh, who assumes she is a French agent, gives her no choice. Although aware that she presents a suspicious image, she dare not attempt to tell him the full truth for fear of an unknown enemy who seemingly wants her dead.

As Justin and Merriana struggle toward opposing goals, the attraction they feel keeps drawing them closer. The question becomes, can they trust each other long enough for love to triumph?

A governess in hiding

The daughter of an infamous courtesan, Katerina loses everyone she loves in a shipwreck off the

coast of Italy. Now, without a penny to her name, she decides to pass herself off as a governess.

Still mourning his late wife, Michael Lindley knows life must go on-and that his little sister and daughter need a woman’s nurturing. When a dark-eyed beauty alights on his doorstep, claiming to be widowed governess, Michael feels a fire rekindle in him that he thought had been snuffed out long ago. And in Katerina, who thought her capacity to love had gone down with the ship, there flares a yearning that only Lindley can subdue.

A woman in danger-and in love…

But when Katerina and Michael finally dare to give way to desire, Katerina’s past steps from the shadows… and demands her life.

But just as they give in to the desire that knows no words, a stealthy enemy plots his revenge-and their newborn passion must undergo the ultimate test…

The Start of the Rainbow

A Daughters of Erin Short Story

Allison and Finn are intellectuals and Irish patriots in Dublin of 1802–and they certainly don’t believe in enchanted leprechaun gold! Nor do they believe in romance–until a magical encounter shows them what can happen when they let true love into their lives…