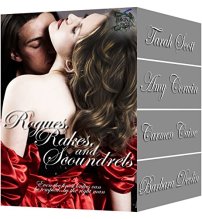 Only a Duke Will Do 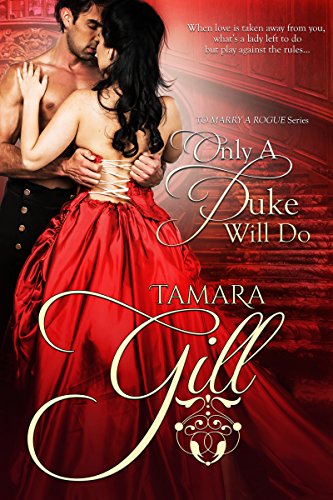 To Marry a Rogue Book #2

Without a Season, Lady Isolde Worthingham captured the Duke of Moore’s heart at a country dance. But on the eve of her wedding, a scandal that rocked the ton and sent her fleeing to Scotland alone and unwed, leaves her perfectly planned future in a tangle of disgrace and heartbreak.

Merrick Mountshaw, the Duke of Moore loathes the pitiful existence he hides from the ton. With a scandalous wife he never wanted, who flaunts her many indiscretions, life is a never-ending parade of hell. When the one woman he loved and lost returns to London, he knows he can no longer live without her.

But vows and past hurts are not easily forgotten. Love may not win against the ton when a too proper Lord and Lady play by the rules.

This is a mostly sad tale of betrayal and love lost then rediscovered.
What’s a lady to do when her long time best friend betrays her in order to steal the man she was about to marry just before the wedding.
Leave town and the country in disgrace, that’s what. Now five years later Isolde has returned home. Her former betrothed is married to the woman who betrayed her.
This convoluted story is heartbreaking at times. Will Isolde and Merrick get their chance together again and their Happily Ever After?
I gave this sad tale 4.25 of 5 stars for storyline and character development and a sensual rating of 3.5 of 5 flames.
I received a complimentary digital ARC of this book from the publisher to read and review. This in no way affected my opinion of this title.

LAST CHANCE FOR THIS OFFER!!!

The Spies of Mayfair Series Book 1

Currently $0.99 in Digital Format at Amazon

London, 1816. A handsome baron. A faux betrothal. And Horatia’s plan to join the

Baron Guy Fortescue arrives in England to claim his inheritance, abandoned over thirty years ago when his father fled to France after killing a man in a duel. He is set upon by footpads in London, and on his way to his country estate, robbers attack him again. Guy escapes only to knock himself out on a tree branch.

Aspiring poet, Horatia Cavendish has taken to riding her father’s stallion, “The General,” around the countryside of Digswell dressed as a groom. When she discovers Guy lying unconscious on the road, the two are forced to take shelter for the night in a hunting lodge.

Someone wants Guy dead. Is it his relative, Eustace Fennimore? He has been ensconced in Rosecroft Hall during the family’s exile and will become the heir should Guy die. Guy proposes a faux betrothal to give him more time to discover the truth.

Horatia is determined to keep alive her handsome fiance, who has proven more than willing to play the part of her lover even as he resists her attempts to save him.

The captain had abandoned society. She was too unrefined for it.

An awkward misfit in an accomplished Boston family, Isadora Peabody yearns to escape her social isolation and sneaks aboard the Silver Swan, bound for Rio, leaving it all behind.

Ryan Calhoun, too, had a good family name. But he’d purposely walked away from everything it afforded him. Driven by his quest to right an old wrong, the fiery, temperamental sea captain barely registers the meek young woman who comes aboard his ship.

To the Swan’s motley crew, the tides of attraction clearly flow between the two. Teaching her the charms of a lady, they hope to build the confidence she needs to attract not only their lonely captain’s attention, but his heart, as well. For everyone knows the greatest charms are not those of the formal lady, but rather the possibilities of a new world built on love.

Amethyst Goldsmith makes dazzling jewelry, but her future isn’t nearly as bright as the pieces she creates. Though custom dictates she wed her father’s apprentice, her heart rebels against the match. In mere days Amy will be condemned to a stifling, loveless marriage, and she sees no way out–until the devastating fire of 1666 sweeps through London, and tragedy lands her in the arms of a dashing nobleman who knows a diamond in the rough when he sees it…

Colin Chase, the Earl of Greystone, has his future all figured out. He’s restoring his crumbling castle and estate to its former glory, and the key to its completion is his rich bride-to-be. But the Great Fire lays waste to his plans, saddling him with trouble–in the form of a lowly shopkeeper’s daughter with whom he’s most inconveniently falling in love…

This book contains steamy love scenes. If you’d prefer to read a Sweet & Clean (kisses-only) version of this story, look for “The Earl’s London Bride” by Lauren Royal & Devon Royal.

While AMETHYST can be read as a stand-alone novel, many readers enjoy reading it as part of a series. All of Lauren’s books feature Chase family members. Should you wish to read them in chronological order, this is the sequence:

Digital Format $0.99 for a Limited Time at Amazon

or Read FREE with Kindle Unlimited

MY HIGHLAND LOVE by Tarah Scott
How does a woman tell her betrothed she murdered her first husband?

Elise Kingston is a wanted woman. Nothing, not even Highlander Marcus MacGregor, will stop her from returning home to ensure that the man responsible for her daughter’s death hangs.

Until she must choose between his life and her revenge.

A STOLEN ROSE by Amy Corwin
A forty-year-old mystery may bring two lonely people together or tear them apart, forever.

When the Earl of Wraysbury rescues a young woman from a carriage accident, he can’t resist her laughing eyes and wry sense of humor, even though their families have been locked in a feud for generations.

Anemone may be achingly lonely but she’s loyal to her family. When she wakes up after an accident in the strong arms of a handsome stranger, she’s immediately drawn to him, and appalled when she discovers he’s her family’s sworn enemy, the Earl of Wraysbury.

Neither Anemone nor the earl is prepared for the attraction they feel, or for the escalation of the war between their families when a 40-year-old mystery triggers accusations of murder. Loyalty and the threat of a dangerous duel are destined to tear the lonely lovers apart unless they are willing to defy their families and take a chance on love.

BEDEVILED HEART by Carmen Caine
(Scotland, 1479) Cameron Malcolm Stewart, Earl of Lennox, had made his peace with destiny. It was not his fate to love as other men.

Wed and widowed seven times, he had come to believe that sharing his name alone would consign a woman to an early grave.

On the sunny spring day Cameron encounters a delightfully devious, bright-eyed lass selling charmed stones in one of Stirling’s alehouses. He tosses her a shilling, thinking only to steal a kiss. But it is a kiss that will change his life forever.

To care for her ailing father, the precocious Kate Ferguson has resorted to swindling the drunkards of Stirling. But a chance meeting with a handsome and seductively mysterious outlaw ends with a kiss that changes the course of her destiny.

But as dark times descend upon Scotland, Kate is caught in a deadly web of court intrigue spun by the royal favorite, Thomas Cochrane. And as King James III falls prey to his fear of the Black Arts, accusations of witchcraft and treachery abound.

The fate of Scotland itself hangs in the balance, and while Cameron vows to defy destiny itself to hold Kate forever in his arms, he must unravel the plots of nobles and commoners alike to protect the country that he loves.

It is the year of Our Lord 1307, and by papal decree, Templar Knight Arucard of Villiers is a hunted man. One of a handful of mariners to escape the Inquisition and Philip the Fair’s treachery, Arucard sets sail for England, where good King Edward II has outlawed torture. While the Crown is more than happy to offer exile and create a new Order to accommodate the famed warriors of the Crusades, such assistance comes with a price. But is the cost one Arucard is willing to pay?

The world in which Isolde de Tyreswelle exists defines her as chattel. Nothing more than a means to an end, she is a puppet in her unscrupulous father’s dastardly play and is thrown into the courtly arena. To further her family’s political aspirations, she is betrothed to a man she has never met and, with her husband, must fight to survive the intrigues and betrayals of her new life. With good reason, she fears men. Can Isolde learn to trust Arucard before they are destroyed by their enemies?