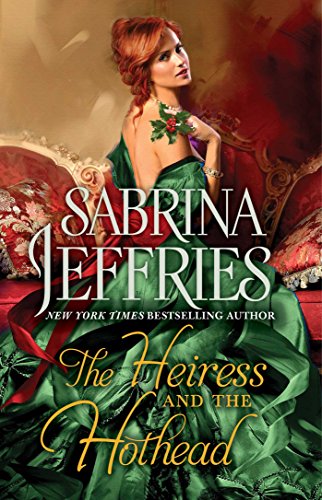 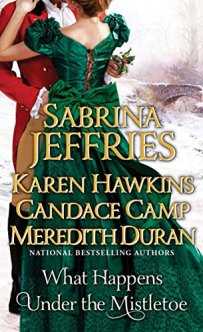 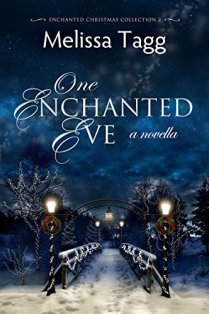 The Heiress and the Hothead

“What Happens Under the Mistletoe” Anthology

Stunned by the heat of an unexpected kiss on a cold winter’s eve, two strangers from vastly different worlds turn hotheaded principles into burning passion in Sabrina Jeffries’s charming yuletide story, The Heiress and the Hothead.

While visiting American heiress Amanda Keane attends a holiday house party in England, she’s stunned when a stranger kisses her passionately beneath the mistletoe. But Lord Stephen, the current Marquess of Knightford’s youngest brother and a radical crusader against poor mill practices, is equally stunned to find that the lovely and spirited woman he kissed by mistake is a mill owner in America. When an accident on Christmas Eve has the hothead and the heiress from two different worlds joining forces to help injured mill workers, their passion for principles becomes a passion for each other. But is that enough to bridge an ocean of differences and a family of determined meddlers?

I had not read this sweet little novella when it was previously released in the anthology “What Happens Under the Mistletoe” so this story was new to me. I had, however read all three of the other titles in this series so was somewhat familiar with the hero and the heroine.
It is nice to see them get their own story if only in a shortened format. I’m always torn with a novella as to whether it would be better as a full length novel. I must say I don’t think this one would. Ms. Jeffries gets right to the point with this story. With characters previously introduced to us in “The Art of Sinning”, book #1 of The Sinful Suitors series we get right down to this Christmas related story of two very different people who meet while attending a Holiday House Party. They strike up an immediate relationship due to their very different viewpoints of how they could make the conditions of working in a cotton mill better.
As usual Sabrina Jeffries has written a compelling story. Although you meet some of the characters earlier on in this series this novella can easily be read as a standalone.
I would rate this story and it’s characters with 4 of 5 stars. The heat rating is mild with only one truly heated scene so I feel it is 2 of 5 flames.
I received a complimentary digital copy of this book from the publisher to read and review. This in no way affected my opinion.

What Happens Under the Mistletoe

Also $1.99 at these same retailers

Stunned by the heat of an unexpected kiss on a cold winter’s eve, two strangers from vastly different worlds turn hotheaded principles into burning passion in Sabrina Jeffries’s delightful yuletide story, The Heiress and the Hothead.

In the snowy Scottish countryside, Karen Hawkins’s rakish duke has an unforgettable holiday encounter in Twelve Kisses to Midnight when the alluring lady he surprises under the mistletoe is not who he expected, but a long-lost love with a score to settle.

In By Any Other Name, Edinburgh is aglitter for Christmastime as Candace Camp sends a curious gentleman in hot pursuit of an intriguing lady in disguise—one who refuses to reveal her true identity, though she fears he has already stolen her heart with his kiss.

In Sweetest Regret, will the festive spirit of the season sweep Meredith Duran’s feisty heroine beneath the mistletoe—and back into the arms of the dashing rogue whose carelessness soiled her reputation and sent her into exile in London?

In this all-new story collection sparkling with sexy charm and heartwarming wit, four beloved bestselling authors reveal the mix-ups and make-ups, the missed chances and golden opportunities that come but once a year. 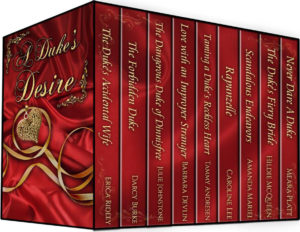 No matter the romance, it’s always better with a duke.

Nine full-length novels featuring romantic tales with the highest members of the peerage. From Medieval Scotland to Regency England and even America, see how are these dukes are tamed and the lovely ladies that discover A Duke’s Desire.

Miss Katherine Ross keeps clashing with the insufferably emotionless Duke of Ravenwood. She’s convinced his heart is ice — until she touches that chiseled chest for herself. One lapse in judgment is all it takes to turn both their lives topsy-turvy…

The Forbidden Duke by Darcy Burke:

A decade ago, Titus St. John’s idle roguery brought about the ruin of Eleanor Lockhart—and his self-imposed isolation. Now she’s back, and she needs his help. But by “saving” her, the Forbidden Duke may ruin her life all over again.
The Dangerous Duke of Dinnisfree by Julie Johnstone: Justin Holleman, the Duke of Dinnisfree, protects his country, king, and heart with classic, cold calculation until the day he’s forced to seek help with a dangerous mission from the fiery Miss Arabella Cartwright who upends his ordered world and entices him at every turn. Arabella learned long ago to count only on herself, but when she becomes a pawn in a political intrigue, she must rely on Justin, but is he her enemy or her ally

Love with an Improper Stranger by Barbara Devlin:

When notoriously hotheaded Nautionnier Knight Blake Elliott, fifth Duke of Rylan, volunteers for a mission, his magnanimous gesture does not include acting as nanny to a couple of blushing sisters. After Lenore suffers a wicked bout of seasickness, Blake nurses her back to health but loses his heart in the process. What happens when Blake alters his course and sets sail for an altogether delectable, more permanent destination?

Piper Baker must marry but the only man she wants, an English duke who has traveled to America to replenish his fortune, is the one she can’t have.

When a handsome stranger arrives in town trying to solve a fifteen-year-old mystery, even the most over-protected heroine knows how to let down her hair… An old-west fairy tale from the bestselling Everland Ever After series.

Lady Amelia’s willing to create a scandal to stay in her beloved England. A Scottish duke ignites her passion, but will she abandon her endeavor for love?

The last thing Gavin Mackinnon, the Duke of Selkirk expects is marriage to a rebellious wildling like her. Or is Beatrice Fingnon exactly what he needs?

Frances Cameron ought to be spending the month planning her wedding, but when a casual toast on the night of her betrothal escalates into a battle of the sexes, she finds herself obligated on a dare to spend the next thirty days working closely with the handsome and powerful Duke of Kintyre. In winning the dare, will she also lose her heart to the duke?

“Sensuality fairly steams from Bernard’s writing.” — Sabrina Jeffries, New York Times bestselling author
Darius Thorne has learned to use his wit and intelligence to strategize a better life for himself. He is the White Knight amidst the small secret circle of gentlemen known only as The Jaded. The handsome scholar shields his heart by keeping a studied distance from the world…until he rescues a beautiful woman.
Isabel Netherton isn’t merely a damsel in distress. A highborn lady of quality unwilling to be a pawn, she is defiantly escaping an abusive husband. But under Darius’s protection she discovers an unexpected champion–a man who teaches her the power of true desire and what it means to be treated like a queen.
However, the law of the land supports her husband’s cruel claim. It will take all of Darius’s cunning to keep one step ahead of their enemies and protect Isabel. In a deadly game of chess, Darius must defeat the Black Knight and sacrifice himself for his Ivory Queen or forfeit all.
An emotional and action-packed chapter in The Jaded Gentlemen series–this one is a keeper! 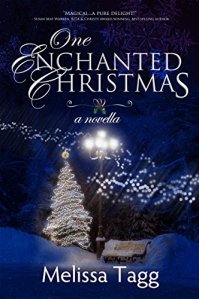 Last December, mystery author Maren Grant had the most perfect night of her life. On a glimmering winter evening, she got to watch the photo shoot for her very first book and ended up on a magical date with the cover model himself—Colin Renwycke.

Fast forward one year. This December, with a looming deadline, restless spirit and her creative spark long since gone, Maren is desperate to get unstuck. And she can’t get Colin out of her head…or his year-old open invitation to spend a couple weeks writing at his family’s farm.

Drew Renwycke never planned to come home and take over the Renwycke family farm. But he’s spent too many years watching his siblings unravel, including his brother, Colin, after one terrible family mistake. If moving to Maple Valley, Iowa, renovating an old farmhouse and switching careers is what it takes to put the Renwycke family back together, he’ll do it.

But his simple plan upends when a scrappy author lands on his doorstep. And she just might be the key to coaxing his brother home. But what if he wants her all to himself? Drew will have to choose between his Christmas wish and the enchantment of a holiday romance that just might be the happy ending they all long for.

A delightful Christmas romance about finding the perfect recipe for love.

After years of mistakes and regret, Colin Renwycke finally has a plan: Hone his baking talent at the

Denver Culinary Institute and embark on a new career as a pastry chef. If he’s lucky, he might even manage to earn back his family’s respect. But despite his skills in the kitchen, Colin’s a mess in the classroom and his ongoing disasters are proving too much for his prickly instructor. If he loses his spot at the school, he’s out of backup plans.

Culinary school instructor Rylan Jefferson has the chance to reclaim her dream of running her own bakery. But she only has until Christmas Eve to come up with the perfect recipe to impress an eccentric investor. She has no time for holiday parties or family plans . . . and especially not for the unruly student baker who couldn’t follow a recipe if his life depended on it.

But Colin has the one ingredient Rylan needs most—talent. Lots of it. And when he makes a proposal that just might solve both their problems, Rylan can’t say no—even if it does mean traveling all the way to Iowa. It just might be that the snow-covered plains and a charming small town full of postcard Christmas cheer are exactly what her hungry heart needs . . . along with a man who is much more than he seems.