$3.99 For Digital Format at Amazon

Lady Rose Thornton never expected to find a half-naked man in her garden. The handsome Irishman claims to be the Earl of Ashton, but was Iain Donovan truly robbed by thieves? Or is he merely an impoverished stranger lying to her?

After losing everything in the potato famine, Iain is searching for a wife whose dowry will save his estate. The beautiful and charming Lady Rose, unable to walk because of an illness that stole her strength, agrees to help him find a wife, but only if he will help her learn to take her first steps.

As their friendship takes root and blossoms into something more, secrets about Iain’s birthright threaten the growing feelings between them. He has no right to love a woman like Rose, who deserves a better life than he can give her. Rose believes that there is more to Iain than a broken past, and she brings light to his shadows.

Within the walls of a secret garden, sometimes miracles happen…

This book is written on an interesting premise that involves an Earl who inherited after the death of his brother and a young lady who is recovering from a debilitating illness.
Why did Iain’s mother treat him like an unwanted child? What is the nature of Rose and Iain’s relationship? Is Rose’s mother demented? Some of these questions are answered in this story, but not all. You will have to read it to get the answers.
The book is well written and did hold this reader’s interest in spite of the slightly convoluted tale. It wasn’t the first book I have read by this author although I admit to having not read many.
I would give this book 3.75 stars and will look for the next book in the series because I want to know what happens to the sister, Lily.
I received a digital ARC of this book courtesy of the publisher in exchange for an honest review. 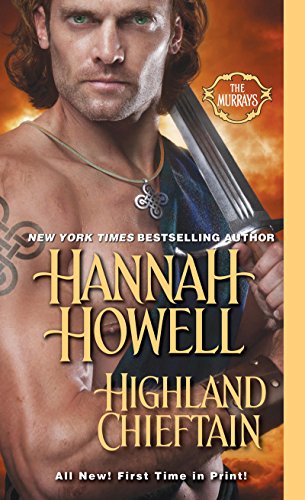 Description:
The Murrays are back in this thrilling new tale from New York Times bestselling author Hannah Howell . . .

Responsible for protecting her younger siblings from their abusive father, Bethoc Matheson is in no position to rescue another soul in Scotland. Yet when she sees a bleeding man on the verge of drowning, that’s exactly what she does, securing him safely in a cave where she can return day after day to tend to his wounds.

Sir Callum MacMillan can scarcely believe such a slight lass as Bethoc could save him from the grasp of death. But he knows the telltale marks of an angry fist on her skin, and he knows she has the soul of a fighter within her feminine frame. Raised to be a protector of the weak by his Murray clansmen, Callum would prefer to be the one saving her—and save her, he will. If he can first survive the treacherous attack that led him into her irresistible arms . . .

This was another well written book by this Author. There was a time when I couldn’t get enough of her books. I did however burn out on them. This was a refreshing reintroduction to Ms. Howell’s books.

I found I liked the characters and the storyline was a good one even though I felt it was a little long and could have ended much sooner than it did. There was a great deal of violence throughout the first few chapters but this element tapered off as the story went on and the villainous characters were killed off. There were characters nearer to the end that I remembered from previous Murray titles and enjoyed getting a wee glimpse of them again.
I would give it 3.75 stars and recommend the read.

I received a digital ARC in exchange for an honest review