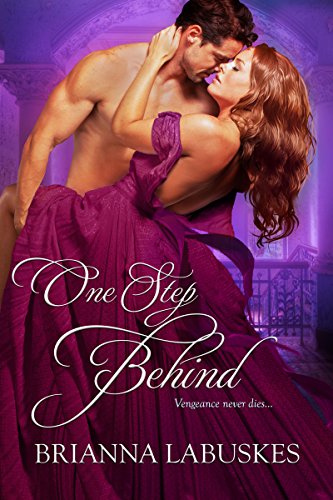 When the unconventional Gemma Lancaster embarked on a mission to infiltrate high society and avenge her beloved cousin’s murder she never would have guessed she’d end up in the arms of a thief. At least, that’s what she assumes when she discovers Lucas Stone breaking into a private safe.

Lucas Stone, the Earl of Winchester, has a reputation for arrogance and a soft-spot for his sister, which is how he ends up in the predicament of hiding behind a curtain at midnight with the dreadfully dull Miss Gemma Lancaster. But he soon discovers appearances can be deceiving when the country mouse turns into a spitfire in front of his eyes and she makes it clear she wants nothing to do with him.

Though one is chasing a blackmailer and the other a murderer, they quickly realize they are on the hunt for the same villain. Now they must work together, which would be fine, if they could decide if they’d rather fall in love or kill one another

I was thoroughly entertained and engrossed by this debut novel from Brianna Labuskes. There was just enough mystery to keep this reader’s interest in this story of blackmail, murder and love. I did guess before it was revealed the murderer’s identity but not because it was a dead giveaway.
I look forward to seeing more soon from this talented new author.
I would give this book 4.25 stars and encourage giving this book a try.
I received a digital ARC of this book compliments of the publisher in exchange for an honest review 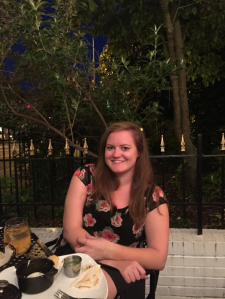 My life-long dream was to join the ranks of the superstar women who penned the romance novels — from historicals to contemporaries and everything in between — of which I could never quite get enough. I try to write the books I want to read, with spunky heroines who save the day while their heroes watch in awe and admiration.

My debut novel, One Step Behind, is being released Sept. 26 through Entangled Publishing. I’m so excited for everyone to read it! Pre-order it here!

When I’m not writing, you can find me playing with my two adorable nieces (but, really, how cute are they?), editing health care policy news (while expounding the virtues of journalism) and watching too much Netflix (and no chill. just Netflix). I also love travel, feminism, country music and hearing from you, so please reach out!

All my love,
Bri

Just $0.99 for a very LIMITED TIME OFFER at Amazon

The night young Benjamin Frederickson met the victim of a house fire, he has remembered it all of his life… Her spirit has lingered in his memory for years.
Even through his days of rebelling against his father, The Earl of Wembley, as he drinks, gambles, and womanizes.

But when he meets the beautiful Catherine Watson again, still scarred from that fire so many years later, he is enchanted.
But can a woman so remarkable remember a boy she met briefly years ago?

Catherine, however, is less than impressed!
Considering herself disfigured and resigned to the idea that she will never marry, she sees his advances as a cruel joke at her expense.

How can any man view her with anything but disgust, especially the dashing future Earl of Wembley?

“I cannot believe that you genuinely want to spend time in the presence of this.” She pointed to her own scarred neck and her covered arm.
“Then your belief in me is sorely lacking,” he sulked angrily.”As is your opinion of your own self.”

It won’t be easy for Lord Benjamin to convince Catherine of his love.
Is he up to the task?

“I wish it were different. I wish you could court me as if I were normal.”

Will Catherine let the past dictate her future?
Will Benjamin give up and let her go?

With three ships sunk in one year by Napoléon’s navy, Richard Emberton is desperate to save his

While collecting his daughter from boarding school in England, George Hayward is on the lookout for a new exporter for his spice plantation in India.

With benefits to be reaped by both sides, Richard agrees to marry the plantation owner’s daughter.

Certain that her chance at love is being sold to the highest bidder, Grace Hayward feels little more than a slave and is determined she will never be happy again.

With such an inglorious beginning, can love flourish?

***Please note this is a CLEAN Romance***