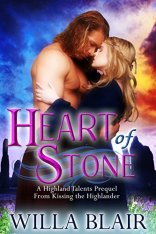 When Lady Helena Simpson flees an unwanted marriage to a revolting lord, she finds refuge with James, a charming, handsome man unlike any she’s ever known. Helena concocts the perfect solution to her problem. She asks—begs—James to ruin her. Surely her betrothed will repudiate her if she is no longer pure. And if all her efforts fail and she still ends up married to a horrid man until the end of her days, she will at least once have known true passion.

But James is not all he seems. He is, in fact, a wicked lord with a dark fancy. When Helena awakens his desire, he becomes determined to take everything she has to offer and more.
No matter the cost.

This book was originally published in 2013 and has been re-edited,

Previously Published in the anthology, Kissing the Highlander

Bound home after two years away, Gavan MacNabb comes across a lass and her deerhound in a moonlit circle of standing stones. Little does he know that the garland of bluebells she weaves and the spell she sings will change the course of his life.

Marsali Murray doesn’t really believe the old wives’ tale that making a chain of bluebells by the standing stones under a waxing moon will bring true love, but she’s desperate to try anything to escape the boring, everlasting sameness of her life. Anything except marrying a man her father chooses for her. When her deerhound, Corrie, insists on following Gavan, Marsali decides that’s the excuse she needs to have the adventure she craves. She’ll go where he goes, whether he is the man promised by her spell—or not.

Gavan has already seen much of the world denied to Marsali. He’s ready to settle down. She is eager to spread her wings. Can they find what they need with each other?

A Lonely Doctor
His treatment for female hysteria calms his patients, and heats Dr. Thomas Winterbourne’s blood like nothing else. Unwed, and desperately lonely, he’s rejected the idea of marriage due to his singular desires.

A Thief
Jenny Marks feels no pity for the wealthy doctor who has more comfort than she has ever found in her nineteen years. She takes a job as his maid, intending on taking anything of value from him and any other upper class people that she can.

Caught
When Dr. Winterbourne finds her pilfering his mother’s jewels, he decides upon punishing her in the most scandalous of manners, unknowingly tying their fate together.

Only For His Lady

***Please note, “Only For His Lady” was previously featured in the “With Dreams Only of You” collection. It now features a prologue and epilogue! It is an approximately 30,000 word novella.

A curse. A sword. And the thief who stole her heart.

The Rayne family is trapped in a rut of bad luck. And now, it’s up to Lady Theodosia Rayne to steal back the Theodosia sword, a gladius that was pilfered by the rival, loathed Renshaw family. Hopefully, recovering the stolen sword will break the cycle and reverse her family’s fate.

Damian Renshaw, the Duke of Devlin, is feared by all–all, that is, except Lady Theodosia, the brazen spitfire who enters his home and wrestles an ancient relic from his wall. Intrigued by the vivacious woman, Devlin has no intentions of relinquishing the sword to her.

As Theodosia and Damian battle for ownership, passion ignites. Now, they are torn between their age-old feud and the fire that burns between them. Can two forbidden lovers find a way to make amends before their families’ war tears them apart?

Lords of the Isles

Get this LIMITED collection at a great price!!

Seven of the top authors in Historical Romance have come together in a fabulous multi-genre collection. Seven full-length novels take you back to the days when knights upheld the code of chivalry and lords with impeccable manners pursued strong and beautiful ladies. Whether on sea or on land, in England or Scotland or in countries across the seas, you’ll find hours of breathtaking love stories in one unforgettable collection.

THE DARKLAND by Kathryn Le Veque

An Irish legacy knight serves his English lord in a castle rumored to harbor a murderer. When the knight falls for a fiery young lady, will she become the murderer’s next victim?

OF ONE HEART by Cynthia Wright

When the reckless Andrew, Marquess of Sandhurst is forced by King Henry VIII into an arranged marriage with a young French widow, he conceives a bold masquerade to outwit the king. Disguised as a humble portrait painter, Sandhurst travels to the French court to see this would-be bride for himself!

Hopeless romantic, Lady Emmaline Fitzhugh, is tired of sitting with the wallflowers, waiting for her betrothed to come to his senses and marry her. When Emmaline reads one too many reports of his scandalous liaisons in the gossip rags, she takes matters into her own hands.

What starts out as a race to survive brutal highland games turns into passion to endure together as two competitors come to depend upon each other.

THE RAIDER’S DAUGHTER by Kimberly Cates

When reckless American spitfire Lucy Blackheath barrels into the Earl of Valcour’s duel in the middle of a gaming hell, he finds the honor he’s won at the point of his sword in peril. Ruthless Valcour has little choice but to force hoyden Lucy to wed him. Can a patriot’s daughter enter the world revolution taught her to hate, and set Valcour’s heart free?

Rogan MacClennan cannot believe the audacity of Emma Macinnes to call him a coward, then sneak off in nothing more than her nightdress to rescue her sister Heather, his intended. Thrown together in a desperate search, Rogan and Emma find something they were not looking for, something forbidden between them…love.

IN THE DEVIL’S BED by Eva Devon

A Soldier Driven By Revenge: Captain Jack Hazard has clawed his way to the top of London commerce as the owner of the most powerful bodyguard service in the country. But Jack will never know happiness until he destroys the Duke of Chiles, the man responsible for his only friend’s brutal death. A Lady Who Won’t Back Down:Lady Regan is nothing like her grandfather, the powerful and infamous Duke of Chiles. In fact, instead of oppressing the poor she, in the footsteps of her murdered father, is determined to help them any way she can. But when she needs Captain Hazard’s help will she harden herself to the rough man he presents or discover that loves exists even in the darkest of hearts?