My Review of a Recent Release 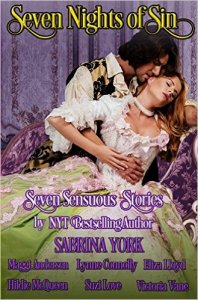 One night, one tryst can change everything…

Seven Sensuous stories by New York Times and USA Today bestselling author, Sabrina York, with bestselling and award-winning authors Maggi Andersen, Lynne Conolly, Eliza Lloyd, Suzi Love, Hildie McQueen, and Victoria Vane. Enter a world of passion and mystery where dashing heroes and dauntless heroines come together in a scorching conflagration that will will tip your world on its end.

ONE SCANDALOUS NIGHT by Maggi Andersen

THE DEVIL YOU KNOW by Victoria Vane

UNDER A SILVER MOON by Hildie Mcqueen

WHAT HE WANTS by Lynne Connolly

Duke of a Gilded Age

When American-born Wesley Parker inherits a dukedom in 1890, he must learn to be an aristocrat. Assigned to the task is his attorney’s daughter, prim Belle Oakhurst. As they travel to England together on a luxurious ocean liner, their tempestuous relationship encounters more than rough seas. Although Wesley is increasingly attracted to Belle, she is already engaged. While Belle begins to regret her hasty promise to marry, she is bound by honor and duty to keep her pledge. Furthermore, a thoughtless fabrication on her part threatens to expose her as a liar. Neither Wesley nor Belle can foresee that their voyage across the Atlantic will be fraught with peril, and will cost more than one man his life.

Gods of the Highlands, Book One

Camulus Vass wants a simple life, absent the power and responsibility that can consume a man. 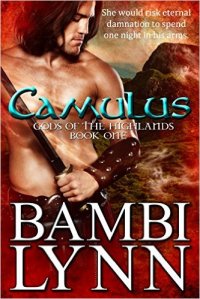 But being laird of a clan as large as the Munro does not offer such luxury. Always under the domineering heel of his uncle, Cam has allowed himself to become a pawn. But the arrival of a mysterious newcomer awakens a beast within him that will not be tamed.

Màili has been given the task of rooting out the spawn of an ancient god. It’s the only way to take her revenge against the man who betrayed her. But getting what she wants means taking the life of the man she loves. Will her hunger for a mortal man wreak further havoc on her already bleak future?

One thought on “More For Monday Bargains, Freebies & Reviews”