In a breathtaking short novel that’s perfect for readers of Maya Banks and Monica McCarty, Violetta Rand introduces a wild clan of Scottish warriors who fight for honor—and live for passion.

Errol MacRae’s days of gallivanting across the Highlands are nearing an end. His father’s health has taken a turn for the worse, and rumors are swirling that the crown intends to transfer ancient lands into the hands of the MacKenzies, the clan the MacRaes are sworn to defend. Errol expects to lead his men into battle soon. So he isn’t pleased when his father instead sends him to retrieve a beautiful flame-haired lass who has fled into the mountains.

Orphaned as a young girl, Aileana vividly remembers how the MacRaes rescued her and welcomed her into their clan. For ten years, she has served them loyally—until the night she’s nearly despoiled by one of the laird’s captains. Aileana risks her life and her reputation to seek refuge in the snowcapped peaks of the Five Sisters, the one place that has always felt like home. But after the strong-armed, strong-willed Errol tracks her down in a blizzard, she finds herself tempted to risk something even more dangerous: her heart.

I enjoyed this read. It is a short novel but not so short as to be considered a novella.
You just know from the beginning that our hero, Errol and our heroine Aileana will be destined for each other.  The characters are well developed and the storyline is believable since belief in witches and curses abounded in this time period. So one could very well believe that a red haired foundling lass would be given a difficult time of it by the other girls of the clan who had taken her in when their laird found her as a child.
This isn’t the first book I had read by this author so I knew pretty much what I could expect from her writing and I was not disappointed.
I gave this book a 3.75 star rating.

What Others Thought:
Advance praise for Her Highland Rogue

“Violetta Rand captures the essence of the medieval Highlands and cleverly weaves a tale wrought with deception and the promise of new beginnings.”—Amy Jarecki, author of The Fearless Highlander

“Violetta Rand sweeps you away to the enchanted Highlands with an enthralling tale of soul-searching, danger, and passion.”—Victoria Zak, author of the Guardians of Scotland series

In the first book of her dazzling new series, bestselling author Ella Quinn introduces the soon-to-be Earl and Countess of Worthington–lovers who have more in common than they yet know. The future promises to be far from boring… 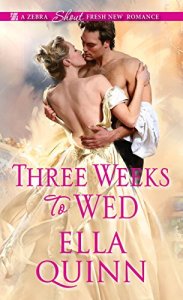 Lady Grace Carpenter is ready to seize the day–or rather, the night–with the most compelling man she’s ever known. Marriage would mean losing guardianship of her beloved siblings, and surely no sane gentleman will take on seven children not his own. But if she can have one anonymous tryst with Mattheus, Earl of Worthington, Grace will be content to live out the rest of her life as a spinster.

Matt had almost given up hope of finding a wife who could engage his mind as well as his body. And now this sensual, intelligent woman is offering herself to him. What could be more perfect? Except that after one wanton night, the mysterious Grace refuses to have anything to do with him. Amid the distractions of the Season he must convince her, one delicious encounter at a time, that no obstacle–or family–is too much for a man who’s discovered his heart’s desire…

“Oh, the tangled webs we weave…especially when our hearts are involved. Three Weeks to Wed is a delightfully heartwarming escape into the sparkling world of the Regency.  Ella Quinn weaves magic.” –Cathy Maxwell, New York Times bestselling author

WHAT IF LOVE TURNED YOU INTO A MONSTER?

and slays evil creatures for a living. The grim and gruesome don’t frighten her; she’ll take on a cyclops or a dragon and not even break a sweat. But when her rival, the charismatic Levi Cannon, comes to town, all her buried fears begin to surface. Melusine realizes she is in danger of something much more horrifying than facing blood-thirsty beasts – she’s in danger of falling in love. Because love alone has the power to reveal a secret terrible enough to completely shatter her world.

Set in the muddy streets of 1850s steampunk Chicago, Immersed by Katie Hayoz is a dark yet romantic fantastical romp. It is a stand-alone novella, the first in a series of adventures that follow Melusine on her quest to rid the world of monsters…and her struggle to come to terms with every monstrous facet of herself.

(The Sons of the Aristocracy Book 1)

If every man is a master of time, then what of the man who loses track of it?

A viscount’s son and a bare knuckle boxer, Michael Cunningham is more interested in building his fortune than spending time at the Marriage Mart. But long ago he promised his mother he would get married “if not before, then on the eve of my twenty-eighth birthday”.

Reminded by his sister, a duchess, that his next birthday is his twenty-eighth birthday, Michael realizes he has much to do in the three weeks he has to keep his promise – not the least of which is to secure the only woman he has ever considered for a wife – the younger daughter of his business partner and the very woman his sister has just hired to be a governess!

The duchess will rescind her offer of employment to Olivia Waterford, but there’s no time for courtship, no time for banns to be read, and certainly no time to wait for a wedding to be planned once Michael proposes. His sister has the perfect plan, though. In order to meet his mother’s deadline and ensure a quick marriage, she insists Michael must ruin Olivia!

Olivia has felt affection for her father’s business partner since the day he rescued her from a rake. But since the gentleman never showed a romantic interest in her during his frequent visits to her family’s home in Shipley, imagine her shock when he climbs into her bed and is discovered by her father! Ruined, indeed!

Now married and living in London, Michael is sure Olivia despises him for what happened, while Olivia is quite sure her husband has feelings for her sister and simply wandered into the wrong bedchamber that fateful Tuesday night.

Will a week be enough time for Michael to court his new wife and convince her of his affections? Or will he regret his last-minute efforts to accomplish too much in too little time? Only time will tell in “Tuesday Nights”.