What if Cinderella didn’t go to the ball to dance with the prince?

What if she went to betray him? 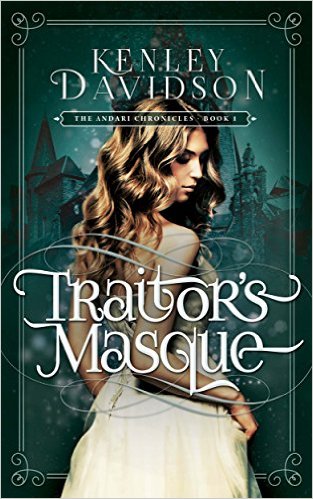 Trystan Colbourne never meant to be a traitor. All she wanted was to escape the suffocating walls of the place she used to call home, where her stepmother’s hatred has made her an unwilling prisoner.

Desperate for a taste of freedom, Trystan accepts an offer of sanctuary from an old family friend, and for a moment, it seems as though all of her dreams are about to come true.

But dreams are fickle, and neither politics nor princes are ever quite what they seem. When she agrees to attend the royal masque, Trystan is plunged headlong into a nightmare of conspiracy, espionage and intrigue. With lives and even kingdoms at stake, she may be forced to sacrifice everything she thought she wanted in order to save the man she loves.

Traitor’s Masque is the first book in The Andari Chronicles, a series of interconnected fairy tale retellings that evoke the glittering romance of the originals, while infusing them with grit, humor, and a cast of captivating new characters.

The first three books in the acclaimed Color of Heaven Series are now available in this special collection which continues to delight readers worldwide.

Book 1: The Color of Heaven (FREE Title when purchased seperately)
A deeply emotional tale about Sophie Duncan, a successful columnist whose world falls apart after her daughter’s unexpected illness and her husband’s shocking affair. When it seems nothing else could possibly go wrong, her car skids off an icy road and plunges into a frozen lake. There, in the cold dark depths of the water, a profound and extraordinary experience unlocks the surprising secrets from Sophie’s past, and teaches her what it means to truly live…and love.  Full of surprising twists and turns and a near-death experience that will leave you breathless, this story is not to be missed.

Book 2: The Color of Destiny
Eighteen years ago a teenage pregnancy changed Kate Worthington’s life forever. Faced with many difficult decisions, she chose to follow her heart and embrace an uncertain future with the father of her baby and her devoted first love.  At the same time, in another part of the world, sixteen-year-old Ryan Hamilton makes his own share of mistakes, but learns important lessons along the way. Twenty years later, Kate’s and Ryan’s paths cross in a way they could never expect, which makes them question the possibility of destiny. Even when all seems hopeless, could it be that everything happens for a reason, and we end up exactly where we are meant to be?

Book 3: The Color of Hope
Diana Moore has led a charmed life. She’s the daughter of a wealthy senator and living a glamorous city life, and is confident her handsome live-in boyfriend is about to propose. But everything is turned upside down when she learns of a mysterious woman who lives and works nearby – a woman who is her exact mirror image. Diana is compelled to discover the truth about this woman’s identity, but the truth leads her down a path of secrets, betrayals, and shocking discoveries about her past. These discoveries follow her like a shadow.

Then she meets Dr. Jacob Peterson—a brilliant cardiac surgeon with an uncanny ability to heal those who are broken. With his help, Diana embarks upon a journey to restore her belief in the human spirit, and recover a sense of hope – that happiness, and love, may still be within reach for those willing to believe in second chances.

Gods of the Highlands, Book One

Camulus Vass wants a simple life, absent the power and responsibility that can consume a man.

But being laird of a clan as large as the Munro does not offer such luxury. Always under the domineering heel of his uncle, Cam has allowed himself to become a pawn. But the arrival of a mysterious newcomer awakens a beast within him that will not be tamed.

Màili has been given the task of rooting out the spawn of an ancient god. It’s the only way to take her revenge against the man who betrayed her. But getting what she wants means taking the life of the man she loves. Will her hunger for a mortal man wreak further havoc on her already bleak future?