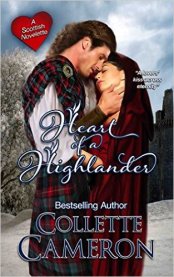 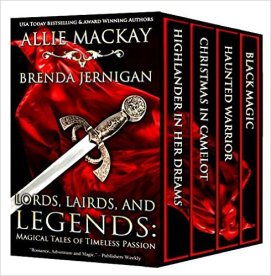 Heart of a Highlander:

When Giselle McTavish left France as the wife of a Scottish laird, she never expected to be

widowed two years later and left with a toddler to raise. Filled with animosity toward Highlander, Hugh Ferguson—the man she holds responsible for her husband’s drowning, and a man she must see every day because he, too, lives at Craiglocky Keep—she’s determined her son, the next laird, will be raised in Scotland, nonetheless. Her struggles to overcome loneliness and homesickness are compounded as it becomes more difficult to fight the warm feelings Hugh now stirs in her.

Hugh has loved Giselle almost from the moment he laid eyes on the petite Frenchwoman. But as the wife, and then the widow of his dearest friend, he has refused to act on his feelings. He blames himself for his friend’s death. Guilt as well as the belief Giselle hates him, keeps Hugh’s lips firmly closed and his heart sealed. That all changes one providential Valentine’s Day when he risks everything by using Scottish folklore and legend to at last proclaims his love.

Mademoiselle at Arms
Threatened with a pistol by the young lady discovered in a deserted mansion, Major Gerald Alderley is instantly intrigued. Who is the beautiful intruder? And why does she disguise herself as a nun? What circumstance has thrust her into an enterprise both foolhardy and dangerous? The girl’s French accent places her with the émigrés from across the channel, except that Mademoiselle insists she is English.
Set on unravelling the mystery, Gerald begins a relentless pursuit, hunting down every possible clue – much to the indignation of Mademoiselle. When her life proves to be in danger from the villainous émigré Valade, Gerald has his work cut out. For Mademoiselle Melusine, engaged in a desperate battle to prove her true identity, believes she is well able to take care of herself and is determined not to be rescued.

Over 1700 pages of historical romance 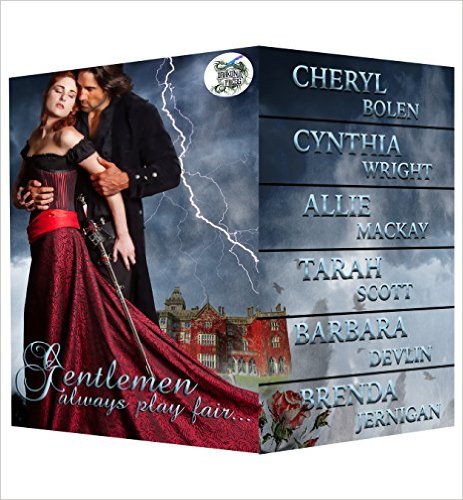 MY LORD WICKED by Cheryl Bolen
What woman would dare make her home at eerie Marshbanks Abbey, perched on a stony hill in remote Northumbria? It is said its owner, the brilliant botanist, Lord Stacks, killed his beautiful bride there ten years earlier.

Unaware of the tales of Lord Stacks’ wickedness, Freddie Lambeth comes to live with her guardian, and through his caring blossoms from a plain, shabbily dressed girl to a lovely young woman. Freddie and Lord Stacks come to need each other as his flowers need sunshine, but Stacks cannot allow himself to love her. His own wickedness has destroyed any chance for happiness.

HER DANGEROUS VISCOUNT by Cynthia Wright
~ 1814: Grey St. James has escaped from Napoleon’s prison on the rocky isle of Mont St. Michel. Desperate and dangerous, he is a far cry from the rakish nobleman who broke hearts in Regency London.

High in a tower in her uncle Nicholai’s French chateau, Natalya Beauvisage is writing a novel. At 26, she is beautiful but hardly marriageable, devoted instead to being an author. However, when a potently attractive stranger appears to hold her at knifepoint, Natalya thrills to a flesh-and-blood man.

HIGHLANDER IN HER BED by Allie Mackay
Tour guide Mara MacDougall stops at a London antique shop-and spots perhaps the handsomest bed ever. Then she bumps into the handsomest man ever. Soon Mara can’t forget the irresistible-if haughty-Highlander. Not even when she learns that she’s inherited a Scottish castle.
Spectral Sir Alexander Douglas has hated the Clan MacDougall since he was a medieval knight and they tricked him into a curse-the curse of forever haunting the bed (the very one that Mara now owns) that was once intended for his would-be bride. But Mara makes him feel what no other MacDougall has-a passion that he never knew he’d missed.

MY HIGHLAND LORD by Tarah Scott
London Heiress kidnapped by the Marquess of Ashlund, read the headlines. Yet no one tried to save her.

British spy Phoebe Wallington searches for answers to exonerate her father of treason. Her quest veers off course when she’s kidnapped by suspected traitor Kiernan MacGregor, the Marquess of Ashlund. But someone wants him dead…and Phoebe stands in the killer’s way. The only way to save her reputation and protect Kiernan is to marry him.

MY LADY THE SPY by Barbara Devlin
Can the mind forget what the eyes have seen?

L’araignee, The Spider, is England’s most notorious spy–and Lady Rebecca Wentworth’s alter ego. After her partner in espionage is killed in the line of duty, Rebecca returns to London, only to discover a traitor has compromised the war effort from the highest levels of the vaunted Counterintelligence Corps. To lure the villain into the open, Rebecca embarks on a new mission, acting as prey for a dangerous enemy. But it is the handsome former Navy captain tasked with her safety that presents the greatest threat, when she falls in love.

THE WICKED LADY by Brenda Jernigan
The Thief
When Trevor Claremont was blind-sided by a pickpocket on the docks beside his clipper ship, he tracked down the culprit–only to face a feisty, emerald-eyed beauty who stirred his hungriest desires. Seeing a solution to his pressing problem of finding a bride to please his dying grandmother, he offered her a deal: marriage to him…or prison, never imaging that this little cut-purse would also steal his heart.

The Sea Captain
Kristen Johnstone realized she’d been outfoxed by this handsome Englishman and reluctantly agreed to a marriage in name only. Soon, she traded rags for resplendent gowns, black alleys for drawing rooms, and fury for fiery passion in the arms of her new husband. But when the scandalous secrets of her past came to light, she would risk everything, including her heart to save a love more precious than gold.

12 full-length novels that are first in a series,

12 full-length novels from 12 New York Times, USA Today, and internationally bestselling authors! Each book is the first in a beloved series. From the majesty of medieval castles to the glittering ballrooms of the Regency, read an enchanting novel from each of the Jewels of Historical Romance!

WONDERFUL by Jill Barnett – Medieval Trilogy
Wales & England, 1269: When Sir Merrick goes off to war, he leaves his betrothed languishing in a covent. Ignored for six years, Lady Clio wants revenge in this sometimes passionate, sometimes hilarious battle of wills.

UNDENIABLE ROGUE by Annette Blair – Rogue’s Club
London, 1815: Thanks to a battlefield promise, Gideon St. Goddard, Duke of Stanthorpe, will take a bride. Sabrina Whitcomb needs to provide for her children, but wedding a stranger is no light matter.

THE BRIDE WORE BLUE by Cheryl Bolen – Brides of Bath
England, 1813: For six long years Thomas Moreland has dreamed of the beautiful young noblewoman who rescued him. Wealthy now, he’s come to Bath to rescue his fair Felicity—while endeavoring to win her love.

NOBLE SATYR by Lucinda Brant – Roxton Family Saga
France & England, 1740s: Antonia is abandoned at Versailles, where the predatory Comte de Salvan plots her seduction. The Duke of Roxton snatches Antonia to safety—but is Roxton a noble savior or a satyr most despicable?

LADY DANGER by Glynnis Campbell – Warrior Maids of Rivenloch
Scotland, 1136: Deirdre of Rivenloch has never had trouble turning away men. But when she marries the powerful Sir Pagan Cameliard to save her sister, Deirdre soon finds herself losing the battle over her heart.

GATHER THE STARS by Kimberly Cates – Culloden’s Fire
Scotland, 1746: Englishwoman Rachel de Lacey is taken hostage by the Glen Lyon, the Highland raider saving Scotland’s orphans from English retribution. Branded a coward in battle, he teaches her a new meaning for courage.

THE MacKINNON’S BRIDE by Tanya Anne Crosby – Highland Brides
Scotland, 1124: When Iain MacKinnon’s young son is stolen by the English, he captures the daughter of his enemy to bargain for his son’s return.

THE VAMPIRE VOSS: LUCIFER’S ROGUE by Colleen Gleason – Draculia Vampire Trilogy
England, 1802: Voss, the Viscount Dewhurst, is an immortal who loves all things pleasurable, with no regard for others. Things are about to change when Miss Angelica Woodmore crosses his path…

AMETHYST by Lauren Royal – Chase Family Series
England, 1666: Amethyst Goldsmith is facing a loveless marriage, and she sees no way out—until a devastating fire sweeps through London, and tragedy lands her in the arms of dashing nobleman Colin Chase.

THE DEVIL OF KILMARTIN by Laurin Wittig – Kilmartin Glen
Scotland, 1307: Symon MacLachlan encounters Elena Lamont and discovers her touch frees him from the madness he battles. He tries to lure the skittish lass to marry him, but will he be able to win her love?

SILVER STORM by Cynthia Wright – Rakes & Rebels
Connecticut & Virginia, 1783: Dashing privateer Captain Andre Raveneau saves spirited Devon Lindsay from the Redcoats. He agrees to deliver her to her fiancé, but doesn’t count on falling in love with her himself! 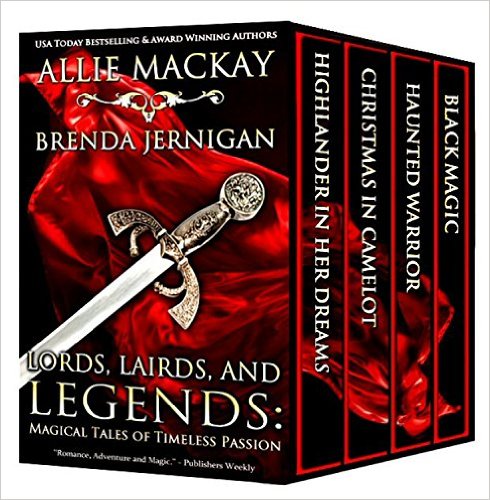 Join Allie Mackay (Pseudonym for Sue-Ellen Welfonder) and Brenda Jernigan on a journey to a more romantic and magical age full of passion, adventure, and legend! Fall in love with bold heroes and their ladies in these wonderful stories set in medieval Scotland and England. There is even a touch of Christmas.

Enjoy this special collection of timeless romance and magic!

Highlander in Her Dreams

They met through Highland Magic, can true love keep them together?

After stepping through a magical gateway, Kira Bedwell finds herself in fourteenth century Scotland, face-to-face with Aidan MacDonald, the irresistible Highlander who has visited her in dreams. As their romance transcends to reality, it will take all of their courage and will for their love to survive beyond time itself…

Aidan is a Romantic Times K.I.S.S of the Month Hero!

The Greatest Gifts . . . Are always unexpected . . .
There was a king – King Arthur of Camelot. There was a knight – Sir Nicholas the Dragon.
There was a wager that each swore he would win . . .

Lady Noelle spies Camelot’s newest knight, the notorious Sir Nicholas the Dragon, a champion as renowned for his prowess in the beds of Camelot’s maidens as for his skill in battle. Noelle’s heart has found the man she longs for, even as her hand is promised to another. Now, as desire does battle with duty, Nicholas has only two choices–to surrender the woman he loves to another man or fight to the end to make her his own.

If you want to visit Scotland and love hot Highland heroes, this one’s for you…

Bound by a centuries-old legacy to guard Scotland’s rugged north coast, Graeme MacGrath doesn’t have time to dally with fetching American tourists. But when Kendra Chase arrives, desire flares between them. On a secret ghost hunting mission, she soon learns that the seaside village of Pennard is more than North Sea nostalgia, peat smoke, and plaid. Renovation work threatens the veil that shields this world from the ancient, half-mythic past. MacGrath and Kendra join forces to save Pennard, but can they stop themselves from the one thing they can’t risk – falling in love?

“For those who believe in magic and love!”
~ Amazon

Dr. Alexandria Dumont wakes up in the year 1835 and finds life is much different than she is use to. But she also finds a child who desperately needs her help to walk again, and a plantation owner, Brad Wentworth, who wants nothing to do with a doctor. When Alexandria suspects that Brad Wentworth’s mother was murdered, she will risk her life to prove who murdered his mother