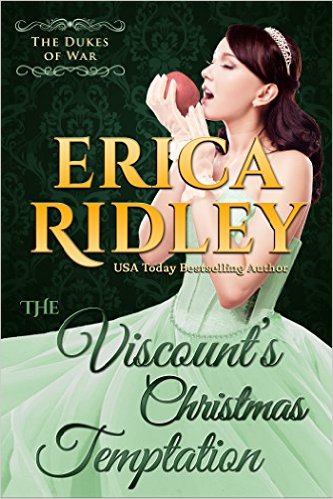 Certain individuals might consider Lady Amelia Pembroke a managing sort of female, but truly, most people would be lost without her help. Why, the latest on-dit is that rakish Viscount Sheffield is canceling the fete of the year because he hasn’t time for silly soirees. He doesn’t need time—he needs her!

When a flash of lightning destroys the venue for his family’s annual Christmas ball, Lord Benedict Sheffield intends to enjoy a relaxing holiday for once. But after twelve days of beguiling Lady Amelia’s guerrilla tactics, he’s up to his cravat with tinsel… and tumbling head over heels in love.

The Dukes of War historical romance books in series order:

Get freebies and 99¢ deals at ericaridley.com/club99

Lisa Mortan’s ideal life crumbles when her rich and powerful fiancé demands she ends an unwanted pregnancy. With no job or social support, she flees to a small town in hopes of finding a good family for her unborn baby, but instead finds a man who is as broken as she is.

Eric Gaylord returns to his home town for a respite after a tragic loss, but when his spitfire mother takes on an unknown woman as a business partner, he is forced to face the nightmare he’d left behind or risk losing the one woman who could heal his heart.

Will she be able to save him from himself?

Grace finds herself wed to a man who loathes her. She is shunned and exiled to the farthest corner of the land. It wouldn’t hurt so much if he hadn’t once been her best friend.

Thomas became a duke long before he was ready. Now he can’t go anywhere without women trying to entrap him into marriage. He expected better from his childhood friend.

How can friendship, let alone marriage, thrive in the face of bitterness, suspicion and misunderstanding?
What’s to be done when the hurtful choices made in anger have lasting consequences?

Hiding in the shadows just got harder.

When tragedy strikes, Juliana and her family must flee their home. Can they persuade a virtual stranger to help them? Juliana

isn’t so sure, especially after their chaperone threatens to cane him. Even as Juliana struggles to trust him, she finds herself drawn to this mysterious man. Surely all she wants from him is refuge…

Rupert is a man whose life depends on his ability to remain unnoticed. What, then, is he supposed to do with this family he’s inherited? His life is overrun with an ancient chaperone who would terrify a lesser man, two spirited girls, and the secretive Juliana – someone he comes to think of as his own precious jewel.

With this new responsibility thrust upon him, Rupert will have to make sacrifices – but will God ask him to sacrifice everything?

The Color of Love

(The Color of Heaven Series Book 6)

gripping tale that will move and inspire you.

Carla Matthews is a single mother struggling to make ends meet and give her daughter Kaleigh a decent upbringing. When Kaleigh’s absent father Seth—a famous alpine climber who never wanted to be tied down—begs for a second chance at fatherhood, Carla is hesitant because she doesn’t want to pin her hopes on a man who is always seeking another mountain to scale. A man who was never willing to stay put in one place and raise a family. But when Seth’s plane goes missing after a crash landing in the harsh Canadian wilderness, Carla must wait for news… Is he dead or alive? Will the wreckage ever be found?

One year later, after having given up all hope, Carla receives a phone call that shocks her to her core. A man has been found, half-dead, floating on an iceberg in the North Atlantic, uttering her name. Is this Seth? And is it possible that he will come home to her and Kaleigh at last, and be the man she always dreamed he would be?