Traveling through time…for a Highlander.

It’s been four long years since Arianna MacLeod Cunningham’s ancestor opened a portal in the past to free lost souls and inadvertently pulled Arianna through from the future into her time. Arianna desperately wants to save her ill father and return to him, and when she travels to the Highland Games being held so near her childhood home, that desire is one she can no longer deny.

Highland warrior James MacDonald is at the Games representing his clan. He hopes to topple the reigning champion, although the last thing he expects is to fall under Arianna’s spell. She’s the girl he cared for when she first fell through time, and now four years later, the woman he can’t allow to walk away.

When Arianna seeks to send a message to her father, James comes to her aid, only now destiny is about to pull them both apart. Can James find a way to save the woman he loves…even through the separation of time?

Until There Was You

How far would you go to get your fantasy man?

Would you marry someone who looked just like him?

Genevieve Hannigan has loved her big brother’s best friend, Wallace Turlock, for as long as she can remember. But when he never noticed her, she settled for Wallace 2.0.

With her disastrous two month marriage behind her, Gen knows that nothing but the original Wallace will do.

But when Genevieve’s ex-husband is back in town with hopes to reconcile, things are about to get complicated …

There are worse things than being spectacularly jilted. Losing a leg, for instance, or getting shot—well, perhaps not: The bullet Alistair took fighting in the peninsula never landed him in London’s scandal sheets.
Captain Alistair Beaumaris never dreamed he’d be tossed over by Lord Fairchild’s bastard daughter, losing both her and her fortune—a singular humiliation that should have taught him a lesson. But when your luck is out, you do foolish things, like quarrel with your oldest friend. Or mistake a perfectly respectable widow for a lady of easy virtue.
Unfortunately, that kind of blunder needs fixing.
Yielding to his troublesome conscience, Alistair tracks down the elusive widow . . . but the only thing he doesn’t find is an easy way out.

Alexandra Champagne finds herself swept up in the Civil War while searching for her twin brother. After her grandfather is captured, she must deliver a vital message to Confederate officers in Vicksburg. Forced to travel through war strewn land to deliver this message, she is protected by a man she believes to be a Yankee – her Yankee savior.

During the siege of Vicksburg, Thomas Munroe finds his heart sieged by a fearless, lovely Southern belle, Alexandra Champagne. As he fights to keep her safe, her stalker turns his attention on Thomas. Can the two of them keep each other alive long enough to survive the war?

Can Thomas convince her to surrender her heart to him?

The Lion of the North 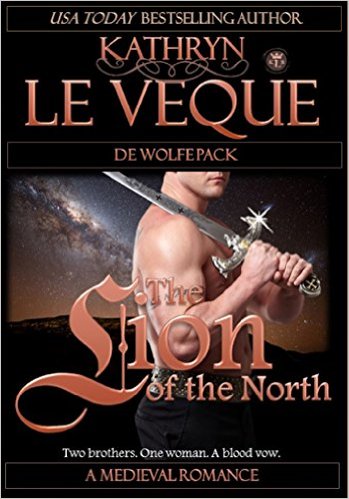 “The epic Medieval Romance is back – thanks to Kathryn Le Veque!” – Claire Delacroix, NYT Bestselling author

1461 A.D. – Two brothers and the best of friends. One is betrayed and murdered at the Battle of Towton by men who were supposed to be his allies. The surviving brother, Sir Atticus de Wolfe, promises to seek revenge for his brother’s murder. The Lion of Northumbria, heir to The Wolfe’s legacy, is now unleashed and seeking vengeance. No one is safe until his bloodlust is sated.

But there is the matter of his brother’s widow, Lady Isabeau de Shera de Wolfe. Will Atticus’ vengeance stand in the way of falling in love with his brother’s sweet and sexy widow? Discover the true meaning of the power of love in this great historical adventure of betrayal, passion, and retribution.

Beautiful and impulsive, Lady Martine vows never to fall in love after her mother dies of a broken heart. But for her brother’s

sake, she agrees to wed, sight unseen, the younger son of an English baron. The betrothal has been arranged by her brother’s old friend and fellow Crusade veteran Thorne Falconer, a landless knight in service to the baron.

Born into wretched poverty, the powerful and handsome Thorne pursues the one thing that separates the rich and the poor: land. As a reward for finding a wife for the hot-headed young Edmund, Thorne is to receive what he most craves, a grand manor of his own.

Neither Martine nor Thorne counts on their overwhelming attraction to each other. As the two improbably lovers struggle to deny their desire, they are drawn into a passion so fiery it sweeps away everything but all-consuming love.

“A powerful debut historical novel by an exciting new talent, Falcon’s Fire will ignite your imagination and passion for medieval romances.” Romantic Times

“Falcon’s Fire is a fast-paced, vividly detailed medieval romance filled with several interesting and very memorable characters. Of noted interest to readers will be the variety of intriguing female personalities in Patricia Ryan’s terrific tale. Patricia Ryan is definitely an author to watch!” Affaire de Coeur

“Destined to become an all time favorite among medieval fans.” The Medieval Chronicle

Patricia Ryan is the USA Today bestselling author of more than two dozen romances and mysteries, including the #1 national bestseller Still Life With Murder. Her novels have garnered rave reviews and been published in over twenty countries. A RITA® winner (for Silken Threads) and four-time nominee, she is also the recipient of three Romantic Times Awards and a Mary Higgins Clark Award nomination for the second book of her historical mystery series featuring Boston governess Nell Sweeney, which she wrote under the name P.B. Ryan.

To find out about new print and audiobook editions, freebies, discounts, and giveaways, be sure to subscribe to Pat’s newsletter at patricia-ryan.com. And if you would like to receive an email when Pat publishes a new book, just follow the Patricia Ryan and P.B. Ryan author links at the top of this page and click the big yellow “Follow” button.