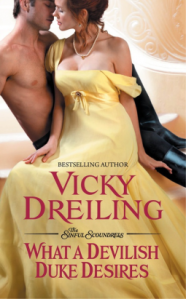 The dress on the cover seemed a little too modern for a historical romance. It is a beautiful cover, but that initially made me question if I’d like to read this book.
Harry Norcliffe never wanted to inherit his beloved uncle’s title. The rigidity of the ton, the incessant reminders from his marriage-minded mama that he must settle down with a highborn lady and produce an heir and a spare: it’s all such a dreadful bore. So when his mother asks him to take part in a dancing competition, he patently refuses. Most women would be over the moon to be pursued by a wickedly handsome-not to mention wealthy-duke like Norcliffe. But Lucy will not be any man’s trophy. She could use a friend, though, and what begins innocently soon ignites into desire.
Lucy has taken on more than one job in order to keep a roof over her and her Grandmama’s heads after loosing her position as a seamstress. She is acting as a maid at a gentlemen’s club, acting as an assistant to a disreputable Dance Master and serving lemonade at Almack’s.
She has made an enemy of the disreputable Dance master she once worked for as he believes she is the reason he has lost his clients.

I received this book free of charge from NetGalley and the publisher so I may leave an honest review.